METH, guns and a large amount of cash 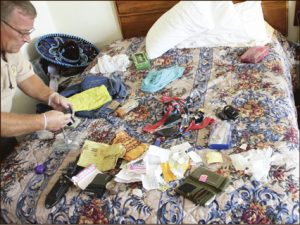 Photo by Greg Bird (Above) Deputy Tom Smith photographs evidence recovered during an arrest Wednesday afternoon. A large quantity of meth (below) was also found in a rental vehcile parked outside the room. 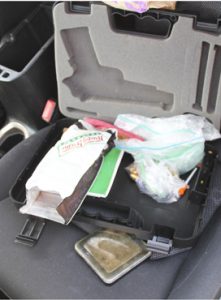 A Lincoln County man was arrested last Wednesday afternoon at Parkland Motel in Stearns after officers discovered drugs, guns and a large amount of cash inside his room.

McCreary County Sheriff Randy Waters stated officers were alerted to the activity when they received a report of a strong odor of marijuana emanating from two rooms at the motel.

Upon arrival officers knocked on the door, which was partially opened by an occupant of the room, who reportedly attempted to block the officers from entering the room while another made his way in to the bathroom.

Sheriff Waters said the officers managed to get in to the room and secured the suspects and were preparing to obtain a search warrant for the rooms when consent to search was given.

During the search officers found a large amount of cash, some counterfeit bills, a quantity of marijuana and methamphetamine, along with drug paraphernalia, several guns and a bullet-proof vest.

A subsequent search of a rental vehicle obtained by a suspect turned up a handgun in the center console as well as a large quantity of suspected meth, weighing possibly more than two ounces.

Assisting on Scene were Deputies Tom Smith and Odell Smith.

The investigation is continuing and additional arrests and charges may be pending.