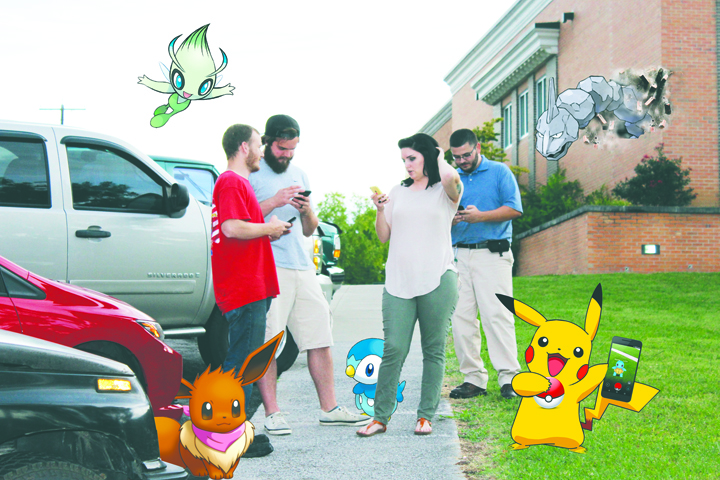 Photo by Eugenia Jones
Eric and Misty Pelow along with Alex and AJ Vanover scour the courthouse lawn searching for Pokémon™ unaware that a random Onix is on the move, busting out of the courthouse in search of battle. 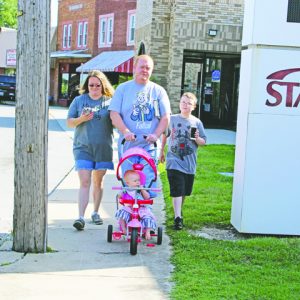 Eric and Misty Pelow along with Alex and AJ Vanover scour the courthouse lawn searching for Pokémon™ unaware that a random Onix is on the move, busting out of the courthouse in search of battle. 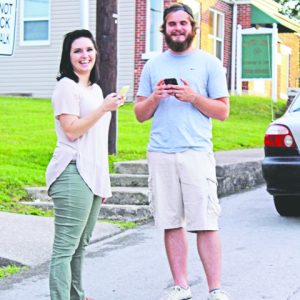 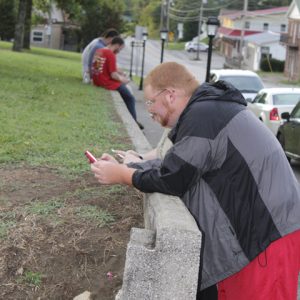 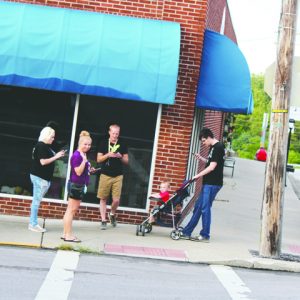 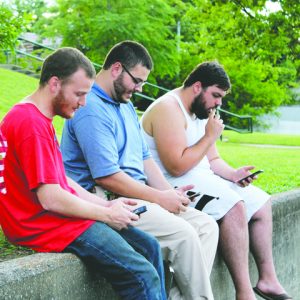 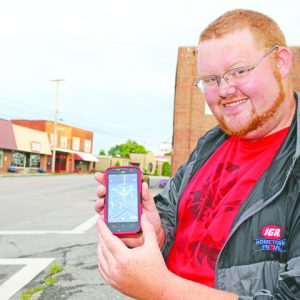 Why are so many people throughout McCreary County and elsewhere walking about their neighborhoods staring intently at the screens of iPhones or Android smartphones clutched tightly in their hands?

Why is Main Street of Whitley City suddenly a gathering place for groups of young people using their phones to explore the community?

It’s because countless Pokémon™ monsters have been released at semi-random locations in McCreary County and across the nation.

If you’re like me and don’t know much about gaming and Pokémon™, it is a bit confusing.

According to McCreary County’s Samantha Tapley, it all started in the mid-1990s when Pokemon was released as a video game for Game Boy. The game quickly morphed into one huge commercial success with more video games, card games, an anime, and lots of merchandise.

The original video game takes the player (or trainer) to the land of Pokémon™ (a play on the words “pocket” and “monsters,”) to capture a variety of monsters using small, red balls called Poke Balls.  Each player strives to become the world’s best trainer by capturing and training as many monsters as possible.  Players (trainers) can then use their captured monsters to fight.

So what does a video game from the mid-1990s have to do with the hordes of people currently staring at their smartphones as they walk (mostly in the evening) on the sidewalks of Whitley City?

Thanks to the recent release of Pokémon™ GO, a new augmented reality game which incorporates GPS into the virtual world of gaming,  Pokémon™ monsters are, in a sense, now happily at home in the real world.  Just like the original video game, players capture, train, and fight their monsters.  The difference now is, by using the gaming app on their phones, players must actually walk through communities in search of monsters.  When a player comes across a Pokémon™ location, the game prompts the phone’s camera and a cartoon Pokémon™ monster appears on the screen.  Photographs of the captured monsters can be taken and shared.  Using their phones, players capture and tame their virtual monsters.  Players can then choose to fight their monsters against others at established “gym” locations-usually at sites of interest such as public monuments, parks, etc.

Some glitches have arisen with use of the game.  Initially, there were concerns that downloading the gaming app resulted in the player giving up too much personal information and losing his/her privacy with emails, etc.  However, most of these technical issues have been addressed and resolved.  There have been isolated incidents of people using Pokemon locations for criminal intent.  There have also been reports of injuries due to people walking in front of cars, falling off embankments, etc. because of concentrating so intensely on their smartphones while playing Pokémon™ GO.  Problems have also been reported when players have accessed private property while attempting to find Pokémon™.

Proponents of the game cite it as a wonderful way to get exercise from the walking required to find and capture Pokémon™.  Since friends and family members often go “Pokémon™ hunting” together, it can be an exciting way to socialize.  It’s also a great way to explore and learn about landmarks in the community.