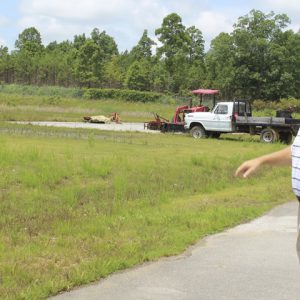 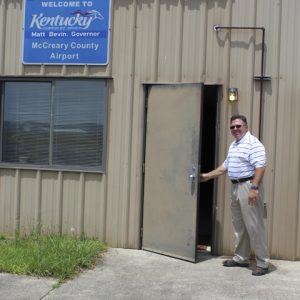 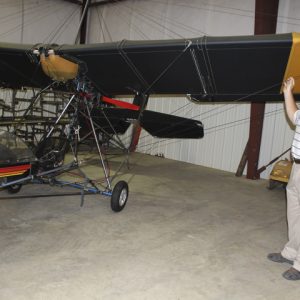 “The McCreary County Airport is a diamond in the rough,” exclaimed licensed pilot Dr. Tim Smith.  “It just needs to be polished up and given a purpose.”

Smith, a McCreary County native who graduated from McCreary Central in 1982, is eager to begin the job of polishing and giving purpose to the neglected and oftentimes controversial McCreary County airport.  If he is successful, the airport may soon roar with workforce and economic development opportunities.

Smith has worked in various educational environments for the past twenty-eight years.  After graduating from the University of Kentucky, Smith spent nine years working in his wife’s home state of California.  The couple subsequently moved to Frankfort, KY where Smith served in several roles, including instructional technology coordinator for the Kentucky Department of Education and central office administrator in Frankfort Independent Schools.

“I’d like to come back to McCreary County,” Smith remarked.  “I want to give back to my home community by helping kids learn science, technology, engineering, and mathematics (STEM) through relevant, real world connections and experiences.”

Smith sees the local airport as the way to achieve that goal.

In 2010, Smith founded the National Air and Space Education Institute (NASEI).  The conceptual framework for the organization was to provide aerospace courses, technical support, competitions/challenges, and summer camps to any school wishing to implement an aerospace career and technical education program.  NASEI has grown to include over fifty school districts in Kentucky, Indiana, and Tennessee.  Students in the program are given the opportunity to engage in three different aerospace career paths:  flight/aeronautics, aerospace engineering, and aviation maintenance/manufacturing.

With Outdoor Venture Corporation President J. C. Egnew donating the necessary 2016-2017 financial support, McCreary County Fiscal Court serving as fiscal agent (at no cost to the County), and the local Airport Board agreeing to provide space at the airport for education labs, etc., Smith is now ready to begin the program and is busy laying the groundwork of turning initial goals and objectives into reality.

The goals for 2016 are lofty and  include establishing the McCreary Aerospace Academy (MAA) Advisory Council (with members from aerospace, education, and business), recruiting 12-15 middle/high school students from McCreary County, building the MAA education center at the airport, building strategic partnerships with local schools, aerospace organizations, and other entities, implementing an Open House at the airport (October) and Aviation Day (May 2017), and hosting the first middle school aerospace camp at the airport in June.

MAA students will engage in an online content management system (similar to university Blackboard systems) as well as hands-on labs (flight simulation, engineering, manufacturing, and maintenance).  During the first year, all labs at the airport will take place on Friday evenings and Saturdays.  During the first year, students will be introduced to aerospace engineering, manufacturing, operations, and maintenance.  The second year will offer an introduction to aeronautics and flight while the third year will focus on advanced Aeronautics and Private Piloting.  Students will explore advanced aerospace topics during their fourth year.  Students will be eligible for dual college credit beginning the second year of the program.

“Students can have their private pilot licenses before they go on to college to complete an aerospace career path,” Smith shared.  “This program will give students from McCreary County a head start on their peers when they get to college.  My personal goals are to help kids in McCreary County learn more science and math and to develop career paths for those kids who are passionate about aerospace.  A lot of people don’t realize the aerospace manufacturing industry is a leading industry in Kentucky and across the nation.”

According to Smith, McCreary County’s economic growth, as a result of an active airport, can flourish in a variety of ways.

If BSFA is designated to increase the capacity of the airport, pilots can be attracted to the airport which could result in a need for shuttle services to restaurants and tourist attractions.  BSFA can offer scenic flights for tourists, photographers, etc.  Increased flight operations will also lead to the need for aircraft maintenance.  BSFA will actively promote the addition of aircraft maintenance to the local airport.  Local students trained at Somerset Community and Technical College will become a logical pool of talent for this operation.

In addition, an active airport offers a definite advantage in recruiting prospective businesses to the area and in offering flight instruction to students and the community.

Smith is enthused about the opportunity to bring aerospace opportunities to his hometown.

“This airport has such potential for educational opportunities and economic growth in McCreary County,” Smith commented excitedly.  “If you have the passion for aerospace, it has something to offer everyone.”

An informational meeting for the McCreary Aerospace Academy is scheduled for Saturday August 27 at 2:00 p.m. at the McCreary County Airport.  The meeting will be open to interested middle and high school students, their families, and members of the community.  Dr. Smith will be present to answer questions about the Academy and how to earn dual college credit and industry certifications in aerospace.  Students are urged to attend and explore how they can get a head start on a career in aerospace.