The second in a series of articles highlighting young McCreary County entrepreneurs who are proving success can be “homegrown.” 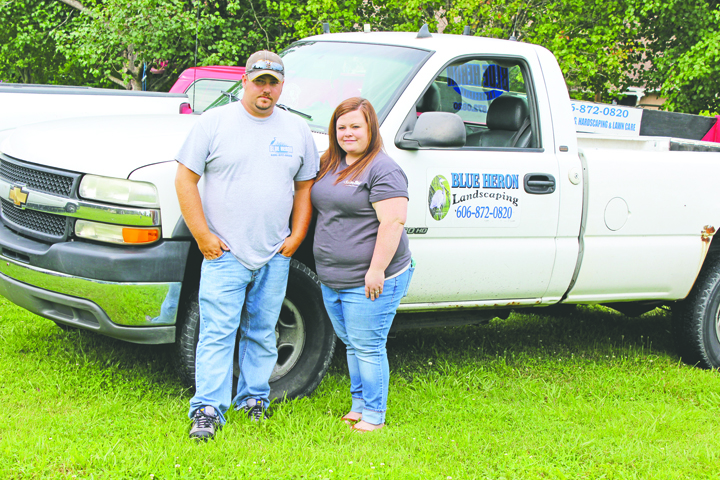 Noah Mathews, pictured with his wife Chasity, got the idea of establishing a landscaping business from working in his dad’s greenhouse.

Thirty-three year old Noah Mathews landed his first landscaping job when a local resident stopped by Blue Heron Greenhouse and Nursery and asked his dad, Delmer, to recommend someone for a small landscaping job.  Although still in high school when he learned about the opportunity, Noah was eager to get to work.

“I grew up working with Dad in his greenhouse,” Mathews remarked.  “That really gave me the idea about landscaping.  I knew the growing season wasn’t long enough to keep me occupied, and I knew there was a need for landscaping.”

Mathews began his work with landscaping about a year before he graduated from high school.  Graduating in 2002, he eagerly moved forward with the establishment of a landscaping business.  Piggybacking off the name of his father’s greenhouse, Mathews established Blue Heron Landscaping.  A few years later, he added mowing to the list of services offered, and today, Blue Heron Landscaping, Hardscaping & Mowing is well established and recognized throughout the Lake Cumberland area.

“I liked the idea of not working for anyone else; however, for the first few years, I didn’t have a life,” Noah remarked.  “All I did was work.  Even though I have regular workers now, it still takes a lot of time.” 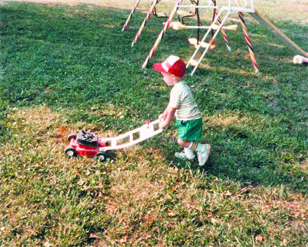 Apparently, Noah knew early on that landscaping and mowing were in his future. He is shown “mowing” grass as a youngster.

“I grew up with my dad working for himself in construction, and now, I’m with Noah,” Chasity said with a smile.  “It’s stressful.  You are always thinking about getting jobs and other things concerning the business.  I’d rather work for someone else, but I don’t think Noah could ever do that.”

The business offers a complete line of services including mowing, landscaping, and hardscaping.  In the winter months, Mathews takes on jobs he might turn down in the regular season including tree removal and clearing of fence rows.  Noah is particularly fond of hardscaping-working with inanimate objects such as stone, rock, brick, wood, and metal.  Hardscaping projects include construction of patios, fire pits, sidewalks, and outside kitchen areas.

“I’m one of the few doing that type of work,” Mathews remarked.  “I like it because it is so unique.”

Living just a few miles from McCreary County’s restored Blue Heron coal mining camp, Mathews based his office out of his home.  However, the work side of his business takes him and his crews well into the Lake Cumberland region including Russell Springs, Liberty, Nancy, Lake Cumberland, and Wayne and Pulaski Counties.  Patrons at many well established restaurants, including Dairy Queen, Mellow Mushroom, and Texas Roadhouse, have probably admired the landscaping efforts of Blue Heron Landscaping.  Working together, the Hamilton Mulch and Blue Heron Landscaping/Hardscaping & Mowing exhibits at Somerset’s annual Home Shows have been recognized as Most Creative and Most Attractive.

Presently operating with three business trucks and six employees, Mathews stays current on the latest trends and techniques by attending classes and maintaining certifications in his field. Demonstrating just how much his business has changed over the years, Mathews pointed with pride to one of his early hand drawn design plans, now framed and hanging on one wall of his office.

“This is how I do it today,” Mathews laughed as he unrolled the impressive computer assisted design for a current project.

“You’ll hear that you have got to leave here,” Mathews shared.  “It’s true there aren’t a lot of jobs out there, but you can make your own.  I’ve done everything gradually.  I’ve never taken on a lot of debt, and I’ve bought as I needed and when I could afford it.”

For Mathews, the biggest challenge is keeping workers and communicating with them.

“I’ve never had anyone tell me how to keep workers,” Mathews said with a smile.  “One of the hardest aspects is to manage your workers and your money so workers can get paid during the off season.”

Mathews has put a lot of hard work and a huge investment into establishing a business in McCreary County.  However, it is obvious he is pleased with the outcome

“What I do for a living doesn’t feel like work.  I like it,” Mathews remarked.  “I put in a lot of twelve hour days.  If I was miserable doing this, it wouldn’t be a good thing.”