McCreary County native is fulfilling his dream of providing health care to his neighbors. 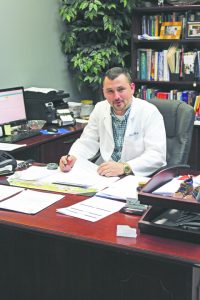 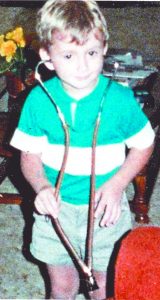 Childhood memories played a role in Dustin Hamlin’s decision to become a licensed nurse practitioner and to establish the Appalachian Family Care clinic in Pine Knot.

Influential memories from his childhood include learning to use a stethoscope, waiting in the doctor’s office for what seemed like an eternity to a sick child when he was taken to his own family doctor as a youngster, and watching his mother read and study to be a nurse when he was just barely old enough to read.

Today, at thirty-two years old and with two businesses to operate, Hamlin is a prime example of a young McCreary Countian who is working hard to make a difference in his native home of McCreary County.

Hamlin acquired all of his pre-college education, with the exception of two years of high school, in McCreary County.  He obtained his BSN from Tennessee Tech and immediately came back home to McCreary County.

“I’m originally from here, and I wanted to treat people here,” Dustin explained.  “I had offers for work in Nashville and several other places, but it just wouldn’t have been home.  My long term goal was to be able to provide a clinic for the people in McCreary County and the surrounding area so they could get health care in a better way.”

After graduating with his BS degree at Tennessee Tech., Hamlin began his career in the medical field by combining his medical skills and his sharp aptitude for business.

“I knew I could provide some services with just my BS degree,” Hamlin explained about his decision to establish, at the age of twenty-six, a McCreary County business focusing on occupational health.

As a result of that decision, in 2010, Hamlin initially established Industrial Wellness Services of KY, PLLC in Whitley City.  The business, with its focus on occupational health, began and continues to offer safety and health trainings, assistance in meeting OSHA requirements, drug screenings, health fairs, CDL physicals and more to schools, government agencies, and industries throughout the surrounding area.

“I knew I had to crawl before I could walk, and I had to walk before I could run,” Hamlin said with a grin.  “I knew, someday, I would be able to transfer a lot of Industrial Wellness Services over to a clinic.  By doing that, I would start off with an established clientele to help pay the bills.” 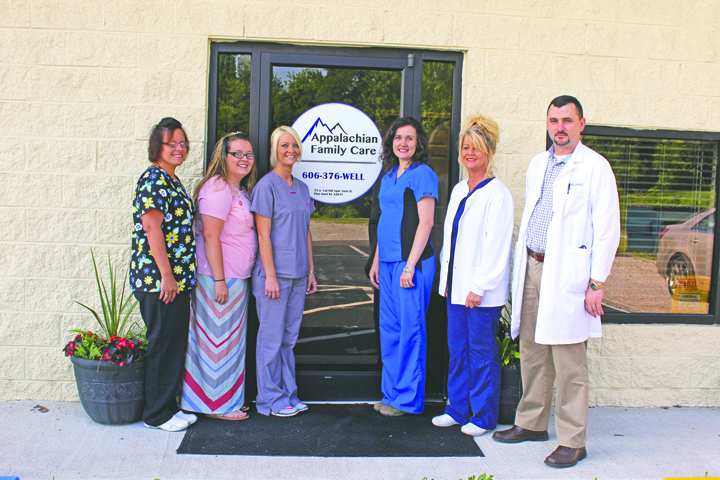 The staff of Appalachian Family Care in Pine Knot is pictured with Nurse Practitioner Dustin Hamlin.

Hamlin stayed busy “growing” Industrial Wellness Services, and at the same time, pursuing his dream of establishing a clinic.  In addition to his work at Industrial Wellness, Hamlin worked at the hospital in London and pursued a MSN degree to be a nurse practitioner at the first-ever United States nurse practitioner college, Frontier Nursing University.   Hamlin’s hard work ultimately paid off when he became Board Certified through the American Academy of Nurse Practitioners. Completing his residency at a University of Kentucky outpatient clinic and St. Joseph Pediatrics, Hamlin was well on his way to accomplishing his goal.

Hoping to obtain a building large enough to house a clinic and the expanding operations of Industrial Wellness Services, Hamlin set his eye on a building on the West side of HWY 27, near the McCreary County Nursing Home and adjacent to Wilson’s Deli & Sunoco.  Presenting a clear business plan to a bank, Hamlin was able to purchase the building and quickly began renovation of the building.

“My grandfather and I went to work,” Hamlin recalled.  “The building was one big room.  We did the carpentry, partitioning, and converted it into four exam rooms, a lab, and office space.”

In 2014, the building opened as home of the Appalachian Family Health clinic and the relocated location of Industrial Wellness Services of KY, PLLC.

“I spent a lot of long hours, and as the old-timers say, burnt a lot of midnight oil,” Hamlin said with a laugh.  “Now, I get a lot of satisfaction out of providing a service this community needs.  Having a family practice makes it easier to provide better service.  If you know the grandfather or father then you can predict and sometimes help prevent disease in the younger generation.  It’s great to meet people and truly know the people you serve.  It’s rewarding to know I’m helping my patients have healthier and more productive lives.”

Hamlin, who first became self-employed at the age of sixteen by co-operating a Hawaiian Shaved Ice Snow Cone business, offered sound advice to young McCreary Countians who want to be successful entrepreneurs in their hometown.

He warned the most difficult aspect of starting a business involves the financing.

“A lot of these banks want you to be in a business for two years before they will finance,” Hamlin remarked.  “How are you going to get established if you have to start off with two years of successful operations?”

Hamlin overcame the difficulty of financing when he established Industrial Wellness Services by following a shrewd business plan.  Initially avoiding the need for financing, Hamlin rented space for the business and bought supplies on consignment-purchasing only what he needed as needed.  In addition, he worked a second job to make sure bills could be paid.  He also chose a business that would complement and support his ultimate goal of establishing a health clinic.

“In McCreary County, you need to choose a business that is a necessity,” Hamlin advised would be entrepreneurs.  “For folks here, you have to provide for a ‘need’ not a ‘luxury’.”

Hamlin emphasized the importance of young people getting prepared with the skills needed to be successful.

“Get the training you need to be successful,” he stated.  “If there is an opportunity to do an internship, take the opportunity and do it!  The whole goal is to get ideas and bring them back here to benefit our community.”

“You’ve got to surround yourself with people who are as enthusiastic and knowledgeable as you are-or even more so,” he declared.  “It has taken time and bumps in the road to get here, but now I’m pleased with the staff I have.  You can’t do it all by yourself forever.”

Finally, Hamlin reiterated the advice that has served him so well.