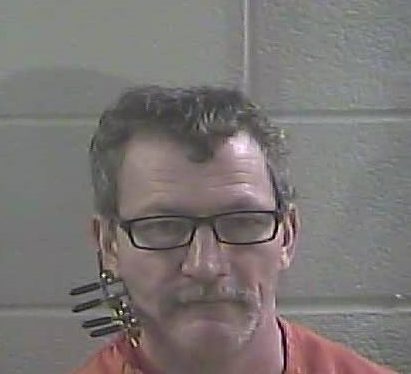 The discovery of a body in northern McCreary County has led to a murder indictment against the father, whom police say shot and killed his own son.

Anthony Murphy, 46, has been indicted by the McCreary County Grand Jury this week with a charge of Murder, for allegedly shooting his son, Charles on or about May 15, 2015.

Kentucky State Police Detective Billy Correll presented evidence to the Grand Jury this month to obtain the indictment against the subject.

The remains of Charles Murphy, 26, were discovered on March 29 after law enforcement officers received information concerning the possible location of a body near a residence on Day Ridge Road.

A search located the remains hidden under a rocky overhang below Murphy’s residence. The body was wrapped in a blanket or carpet and secured with duct tape and an extension cord. The body was also covered with several small rocks, in what appeared to be an attempt to conceal the remains.

At the time of the discovery, Sheriff Waters confirmed his office had an open missing person’s case for Charles Murphy dating back to 2015.

The case was considered a homicide after forensic examination confirmed the identity of the body and the discovery of multiple gunshot wounds as the cause of death.

Anthony Murphy is currently being held at the Laurel County Detention Center on unrelated charges, including trafficking in a controlled substance and Wanton Endangerment – stemming from a December 9 encounter with law enforcement.

Murphy was shot after the McCreary County Sheriff’s Department responded to a call of a possible break-in at a residence on Day Ridge Road.

Sheriff Randy Waters spotted the subject carrying a handgun and running through a wooded area. Murphy apparently ducked inside his residence, then reappeared through a hidden hole under his trailer, pointing a gun at Deputies Greg Chaney and Odell Smith.

Turning toward Deputy Chaney, Murphy reportedly fired his pistol, but the gun jammed. The two deputies returned fire, discharging five rounds and wounding the suspect in the process.

The only other indictment returned by the Grand Jury this month concerns an alleged extortion case.

Mark Soard, of Pine Knot, was charged with one count of Theft by Extortion over $10,000 for reportedly threatened bodily harm to a female victim to force her to deed her interest in a house and lot on or about July 14, 2015.

The Voice would like to remind our readers that an indictment is not an indication of one’s guilt or innocence, but represents that enough evidence exists in a case to pursue the matter in a court of law.