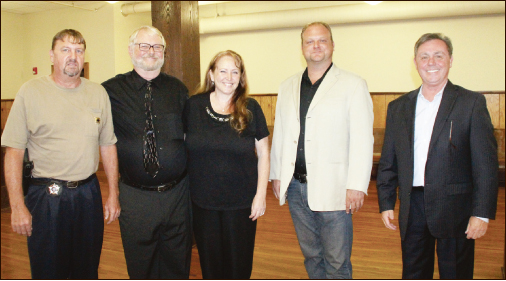 Photo by Greg Bird
Sheriff Randy Waters, PVA Bruce Lominac and Deputy PVA Joni Carson pose with Dale Murray and Robert Crowder, co-owners of Stearns Energy, who announced Wednesday that they would be opening production of coal at the Stearns mine early next year.

McCreary County PVA Bruce Lominac and his staff played an instrumental role in bringing Stearns Energy to the county.

Lominac said the genesis of the project started five years ago when Frankfort told him there was no longer any coal that could be mined in McCreary County, and as a result, the County would no longer get its share of the un-mined mineral tax.

Not willing to take that as an answer, Lominac started down a path that he never expected could lead to reopening the mines in McCreary County.

Going through old deeds and tax records, Lominac found two different entries for the Stearns Coal Company. Further investigation revealed they were for two separate mines, but the company only paid taxes on one of them.

“It was a process of trying to find out who was who, and who owned what,” he explained.

The PVA sent two bills that year to the corporate office in Virginia, but only one was paid – with the explanation that they only paid one tax bill.

Lominac persisted, eventually filing a lawsuit against the Stearns Coal Company in an effort to get McCreary its fair due in taxes from the property.

That lawsuit drew attention to the still untapped coal resources in McCreary County.

Lominac, who has had past experience with coal companies, began to get feedback from interested parties about the property.

“With the new EPA standards requiring all coal plants to install scrubbers, it opened the door for different qualities of coal to be used in the power plants,” Lominac said. “Suddenly, the coal in our #2 seam was perfect for that.”

“One of those parties, Robert Crowder, contacted me out of the blue and said he was looking at doing something with the mine at Mudcut,” he said.

“He spoke about the history and tradition of the coal industry in McCreary County. I knew it was more than just a business venture for him. He wanted to be part of the community.”

The initial discussion led to a 14-month project where Lominac, along with his Deputy PVA Joni Carson, Sheriff Randy Waters, who used to work in the coal mines, and his staff began to do what ever it took to make it possible to bring Stearns Energy to McCreary County.

With their help, and the help of several other business leaders in the community, that plan has now become a reality.

“Coal mines are shutting down all over the county,” Lominac said. “And we are opening one up, it is incredible.”

“It was something that people said couldn’t be done, and we did it.”