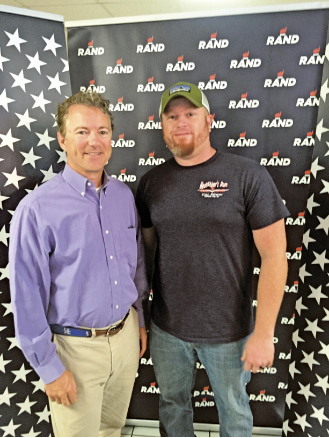 David is a prosecuting attorney as well as a combat veteran, serving the Army in Iraq from 2004 to 2006. He is married with a four-month-old little boy, and has decided to support Rand Paul because he believes Rand Paul stands for him.

“I’m very honored to serve Rand Paul because I think he does a great job serving us. I consider it a privilege to be the County Chair for his campaign and I look forward to having him continue to represent Kentucky in the Senate.”

Dr. Paul’s re-election campaign will be releasing County Chairs over the next several weeks and encourages members of the community to contact them to get involved with the campaign to ensure we continue to have a strong advocate for Kentucky in the Senate.

“I am honored to receive support from veterans who have valiantly served our country. Our military is second to none and much of that excellence stems from having professionals who serve voluntarily. The American soldier is a volunteer in defense of liberty. For you we are grateful: for your strength, your service and your sacrifice.”

For more information and to get involved with the campaign, you can contact McCreary County’s chair at (859) 314-5858 or visit www.randpaul.com