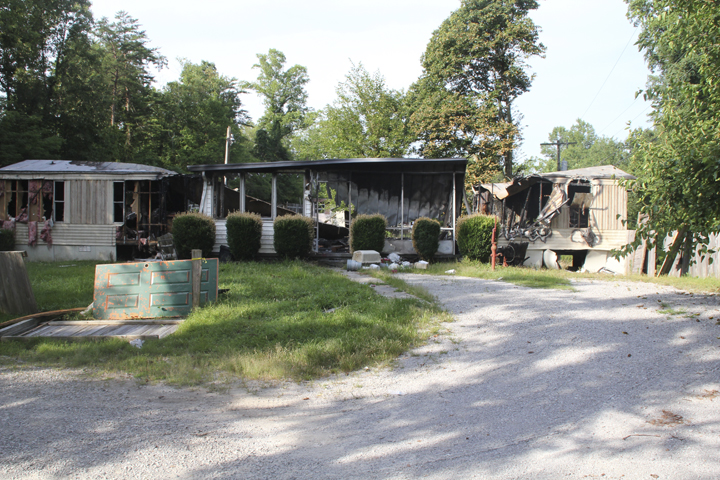 Photo by Greg Bird
This trailer on Hatfield Lane was recently siezed by the Courts after being used in drug-related activities. The property was turned over to the Sheriff’s Department, but has been burned down by an apparent arson before the property could be sold at auction.

A drug bust last year not only led to the convictions of two individuals, but also turned in to a financial benefit for the McCreary County Sheriff’s Department.

A May 31 Forfeiture Order from the McCreary County Circuit Court allowed Sheriff Randy Waters to take possession of the property where the drugs were allegedly sold, and also a moderate amount of cash seized during the initial operation.

Under Kentucky Revised Statute 218A.410 all property used in the facilitation of drug sales is subject to forfeiture and that statute was cited in the order.

In June of last year Linda Baird and Danny Musgrove were accused of operating illegal methamphetamine and marijuana sales from a trailer located on Hatfield Lane in Whitley City.

Baird and Musgrove were indicted by the McCreary County Grand Jury on counts of Trafficking in a Controlled Substance and Possession of Marijuana.

The pair were convicted of the felony offenses and sentenced to a five-year probationary period for their crimes.

The Hatfield Lane property, as well as nearly $9,000 in cash seized during the investigation were turned over to the McCreary County Sheriff’s Department last month as part of a Forfeiture Order in McCreary County Circuit Court.

85 percent of the cash seized ($7,648) went to the Sheriff’s Office, with the remainder turned over to the Commonwealths Attorney Office.

The property will be sold at public auction by the McCreary County Master Commissioner at a later date, with the proceeds being divided between the Sheriff and Commonwealths Attorney at the same 85/15 split.

The value of the property at the time of the seizure was estimated at about $15,000, but since then, a mysterious fire destroyed the trailer and severely reduced the resale value.

On the evening of July 15 Deputy Odell Smith made an arrest at the residence after discovering a subject inside apparently trying to steal an air conditioning unit.

Later that same night the trailer burned down under suspicious circumstances.

“We have a pretty good idea that it was arson,” Sheriff Waters said. “We are investigating, and we will prosecute if we can gather enough evidence.”

The fire left the trailer and all property inside a total loss – damaging the resale value of the property.

“We probably lost half the value,” Sheriff Waters said. “It’s a shame since all the money we would have received would have gone toward helping us police McCreary County and make our community safer.”

“We are thankful to the Court and the Commonwealths Attorney Office in their help with the asset forfeiture,” the Sheriff added. “It shows they are serious about fighting the drug problem here.”

“The message sent is clear ‘If you sell drugs, not only will you face punishment – you could lose your home as well,’” Waters said.