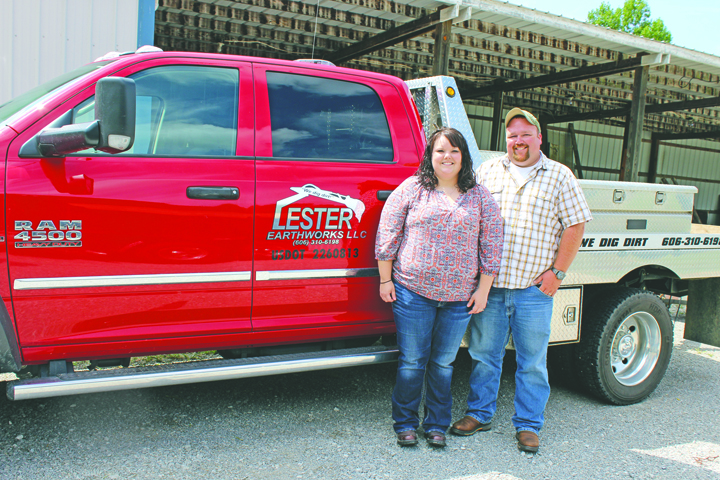 Twenty-nine year old Joe Lester was upfront about what to expect when hiring an excavator.

“You never want to trust an excavator wearing clean boots,” he warned with a grin.

Purchasing his first backhoe when he was nineteen, Joe added a dump truck and bulldozer in 2007.

He recalled graduating from high school and going to college for a semester.

“I would sit in class and think to myself.  I just knew I could take the money I was spending on college and buy a piece of equipment,” Joe said sheepishly.  “I knew if I did that, I could make a go of it!” 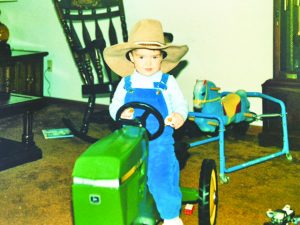 Joe Lester’s passion for equipment and machinery began at a very early age.

Lester has been fascinated by machinery since he was just a child.

“I grew up with farming and being around equipment,” he remarked.  That’s what inspired me to go in business for myself.  Even when I was really small, I remember one of those little Golden books called “Busy Machines.”  I wore that book out.  After that, I was obsessed with machinery.”

Lester began his business by excavating along with lawn care and landscaping.  After a few years, he realized he needed to specialize and focus on excavation in order to be successful.

“That decision has really paid off in the last few years,” he declared.

Today, Lester does general excavation work including residential work, septic systems, underground utilities, dump truck services, and a lot of farm work for organizations like NRCS.  In the future, he hopes to expand and move forward with doing large commercial projects.  Currently, the business relies on two dump trucks, a dozer, two types of excavators, and a skid steer.  The business employs four workers.

“It’s better to say I work with my guys instead of saying they work for me,” Joe remarked.  “I take pride in every single job we do.  I don’t want to be a guy who runs the business from behind a desk.”

“He works on his piled up desk about once a year,” Amanda interjected with a laugh.

“I help with taxes and do spread sheets,” she continued.  “The training I have from working as a quality insurance manager at OVC helps when we buy equipment.  I ask a lot of questions!”

“So many people think I just jump on a bulldozer every day,” Joe added.  “There is so much more to it-from fuel taxes on the dump trucks to permits and lots of paperwork.”

Joe credited his high school experience in Future Farmers of America (FFA) as helping him with leadership skills.  He feels strongly that schools need to put more emphasis on vocational skills.

Beginning his journey into entrepreneurship at a young age, one of Joe’s first business endeavors began in eighth grade when he started selling sweet corn.  He was successful and continued to sell corn for many years.  When he was old enough to get his driver’s license, he bought a mower and began mowing yards.

The husband and wife team seem a good match, complementing each other’s strengths and weaknesses.

Amanda sees Joe as being the brains behind the business.

“I’m here as a support system,” she remarked.  “He needs that.  I had to get used to being a farmer’s wife and a business man’s wife.  It’s an adjustment.  Running a business takes a lot of time.  I wouldn’t change it though.”

At the same time, Joe points to the impact Amanda has on their business.

“She’s such a big part of it,” Joe said with a smile as he looked at his wife.  “If it wasn’t for her doing my books and stuff like that, I wouldn’t be as successful as I am.  She’s the brains behind the scenes.”

Both agree running a business is time consuming.  Throughout the ten year climb, Joe has worked a lot of fourteen hour days and lots of weekends. The couple vacation mostly in fall and winter when the demands of the business have slowed down some.  If the two want to get away, they know to schedule a break.  If they stay home, they both know they will end up working.

“When you are in this type of business, you have to make hay while the sun shines,” Joe said with a chuckle.  “When it rains and you can’t work, you’ve got to make up for it.”

Joe cited managing the growth of a business as one of the most difficult aspects of being self-employed.

“You have to be careful and not bite off more than you can chew,” he warned.  “You don’t enjoy your work if you are worried you are stretching your finances too thin.”

On the flip side, one of the most rewarding aspects for Lester is now knowing he has a plenty of work.

“I can sleep good knowing I’ve got work,” he remarked.  “It’s a good feeling when your debt is manageable.”

Joe and Amanda both offered sound advice to young people who want to establish a business in McCreary County.

First, Joe advised young people who are serious about being self-employed in McCreary County to start small and write/follow a sound business plan. He also advised getting help if needed.  It was Amanda who discovered the assistance available from Kentucky Highland Investment Corporation.  She and Joe both took advantage of the guidance and financial opportunities offered through the organization.  The couple has nothing but good to say about the help they received in building their business.

Both recommended working up in a business by setting 1 year, 3 year, five year, and ten year goals.

Joe also advised young people who want to set up a business and make their home in McCreary County to not let others discourage them too much.

“If it’s really what you want to do-just do it,” he remarked.  “If I had listened to a lot of people, I wouldn’t be doing this.  Ultimately, you are the only one who knows what you want to do.  To be successful, you have to be passionate about it.  I love what I’m doing.”

Joe has been told he could probably make more money living and being self-employed in a different location.  However, for Joe and Amanda, there are other priorities.

“It may be true that I could make more money somewhere else,” Joe acknowledged.  “But Pine Knot, Kentucky is home.  Amanda and I have both been blessed.  As a Christian, I thank the Lord for our coming this far, and I’ve got a wonderful wife/business partner. As far as I’m concerned, I’m living the dream.”