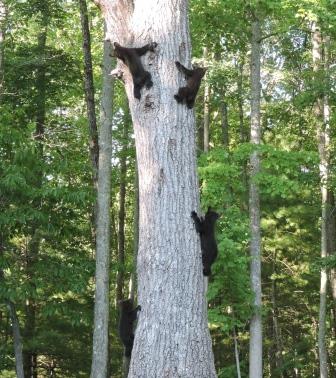 Did you know that while black bears are large, powerful animals who are well equipped to eat meat, they are actually omnivorous.  Join a park ranger on Saturday, August 13, to learn more about one of Big South Fork’s largest mammals, American Black Bear.  Topics covered include black bear biology, how to stay safe in bear country, and your role in keeping bear populations wild.  This fun, fact-filled evening activity begins at 7:00 p.m. (ET) on August 13 at the Blue Heron Campground amphitheater.

Historically, black bears were found throughout the Cumberland Plateau.  However, through habitat changes, black bear were all but eliminated from the area.  In the mid-1990s, 14 female black bears were released in the Big South Fork area.  The bear population has increased ever since in the park and surrounding area.

The National Park Service hosts ranger programs every Saturday evening starting Memorial Day weekend through Labor Day weekend at the Blue Heron Campground.  The Blue Heron Campground is located in the Kentucky portion of Big South Fork NRRA, nine miles west of Stearns off of Highway 742.  This program is free of charge, handicap accessible and all are welcome.  For directions or additional information, please call the Blue Heron Interpretive Center at (606) 376-3787.