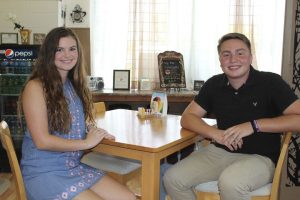 Thanks to the 2016 Governor’s Scholars Program (GSP), two McCreary Central High School rising seniors, were able to get a feel for the college experience during their summer break.  In addition to scholarships, GSP offers a five week summer residential opportunity for one thousand of the state’s best students at one of three Kentucky college campuses.

McCreary Central’s Sydney Pruitt and Zech Moore, both seventeen, were honored to be chosen as 2016 Governor’s Scholars.  The process of being selected was lengthy and competitive.  As part of a group of ten McCreary Central students, Sydney and Zech attended an orientation session last September to learn about the process.  Later, they completed lengthy on-line applications including writing 500 word essays.  They were also judged on community service, extracurricular activities, references, and ACT scores.

“I did my essay about creating a holiday for special needs children,” Zech explained.  “My sister, Micaiah, inspired me to do that.  She amazes me because she wakes up every morning eager to paint, draw, and listen to music.  She is so content with life.”

After completing their applications, the two waited until finally, in April, Sydney received a congratulatory letter notifying her of her selection into the Governor’s Scholars Program.

“I was at my dad’s when the letter came,” Sydney recalled.  “My mom opened the letter and she called me crying.  I thought something was wrong because she sounded devastated!  When she told me the good news, I started crying!”

Zech, selected for the program as an alternate, did not find out about his final selection until a few days before leaving for the residential program at Murray State.

“I was home alone when I got the letter,” Zech shared.  “I was pleased.  When they found out, Dad cried, Mom cried, everybody cried!

Both young people are glad they attended the residential program during the summer.

Sydney, who attended Morehead University, credits the program with giving her the confidence to think about attending a larger school when she completes her high school career.

“Before, I wanted to go to Berea and study nursing,” she stated.  “Now, I’ve changed my mind and feel I can make it at the University of Kentucky and possibly go on to med school.  GSP helped me be a lot more outgoing, too.  When I got back home, I was less shy.  Even my tips at work got better!”

Zech, who plans to attend University of the Cumberlands and hopefully University of Kentucky for pharmacy school, also discovered a newfound confidence during the residential program.

“I dreaded the residential part, but I’m glad I attended,” he shared.  “It helped with my confidence and strengthened my decision making skills.”

Both students have busy schedules.  They will be taking several college classes during their senior years of high school.  Zech participates in the McCreary Central Madrigals, is on the baseball team, and plays music with his family at church.  Sydney is carrying a full load of classes, including three college classes and Advanced Spanish, and works as a hostess at the Santa Fe restaurant.  She is also active in HOSA and enjoys attending church.

“It made me a lot more ready for college,” Sydney declared with a big, confident smile.