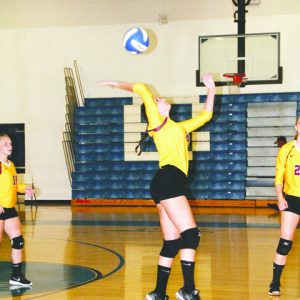 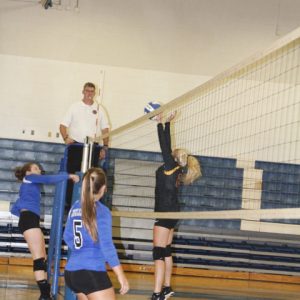 Photos by Greg Bird: Macy Sumner goes up for a block. 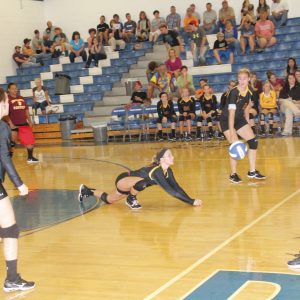 Photos by Greg Bird: Aryn Stephens gets down for a dig, above, in the Lady Raiders’ 2-1 loss to open the season at Jellico Monday night.

It wasn’t the kind of offseason that the Lady Raiders’ Volleyball would have liked to have had, but they are ready to move ahead and try to improve on their 7-14 record last year – only their second losing season since winning the District Championship in 2009.

With construction going on at all schools in the McCreary County School District, the Lady Raiders struggled to find practice space, and will start the season a little behind where new Head Coach Wade Davis would like them to be.

Davis is no stranger to the team – having served as Assistant Coach since 2004, he is well aware of the roster and the potential his team has this year.

But Davis is optimistic about how the team is developing, especially with a load of young talent fighting for spots on the Varsity roster.

“We are certainly excited,” Davis said. “We had a lot of interest in our program this offseason, and a very tough competition for roster spots, and that is always a good thing.”

“We lost a lot of experience last year (11 seniors), but that will only give a lot of our younger players more opportunities to step up and show us what they can do to contribute this season.”

Only two regular starters return from last year’s squad, but the Lady Raiders have a lot of players who saw time on the court last season, and Davis says they will have the chance to show what they can do in an expanded role.

A fresh crop of younger players could also be a factor as the season progresses.

“A lot of our underclassmen will have the benefit of playing JV and Varsity, which will give them more opportunities to develop into stronger players,” Davis said. “It will be very interesting to see where this season takes us.”

The early season could have its share of struggles as the team adjusts to a new scheme on the court.

“We changed things up a little from how we had set up in the past, so we are still working on getting comfortable where we need to be on the floor at times,” Davis said.

“We are stressing fundamentals, such as serving the ball and receiving the serve. Those are two areas where we need to be as solid as we can.”

Davis notes the Lady Raiders are not offensively strong at this point, so they will focus on prolonging the volley and forcing mistakes on the other side of the net.

“We will focus on our defense more, since we do not have the size we have had in the past, so we need to be able to keep the ball in play in order to take advantage of scoring opportunities,” he said.

The Lady Raiders opened their season with a 2-1 loss at Jellico and will open their home schedule with the Lady Raiders Invitational Tournament on August 20.