A prisoner set to appear in McCreary County Circuit Court Monday morning fled from authorities as he was being transported to his court appearance, setting off a manhunt for the escapee. 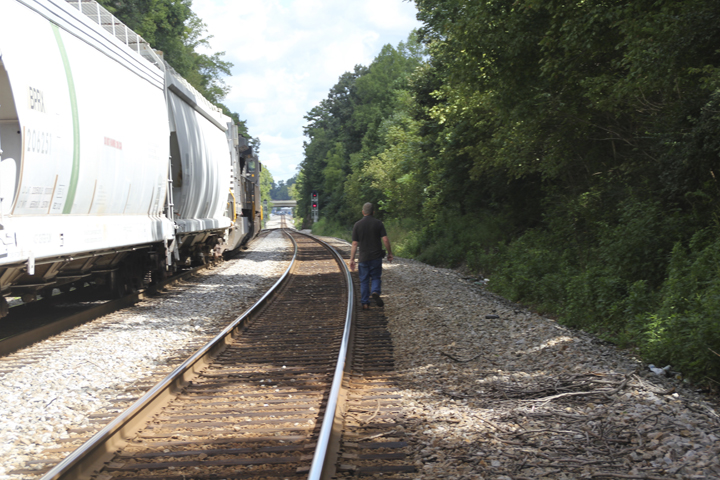 Photo by Greg Bird Jailer Jessie Hatfield searches a stopped train Monday morning after Jimmy Troxell escaped from transport officers on his way to a Court appearance. As of Wednesday morning Troxell was still at large. 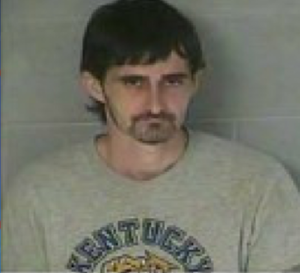 According to McCreary County Jailer Jessie Hatfield, Jimmy Troxell was one of several prisoners being transported via van from the Leslie County Detention Center for court Monday.

When the van parked by the sally-port at the McCreary County Courthouse, and the prisoners were getting ready to exit the vehicle, Troxell reportedly bolted from the side of the van and ran up the rocky embankment and past the law offices across the street.

Judge Executive Doug Stephens stated the van would typically pull in to the sally-port, but a transport van from Wayne County was already occupying the space, prompting the unloading of prisoners outside.

All of the inmates were handcuffed individually, but were not secured together with either leg or waist chains, Stephens confirmed.

Authorities immediately began a search for the escapee, canvassing the surrounding areas, but were unable to locate the subject. 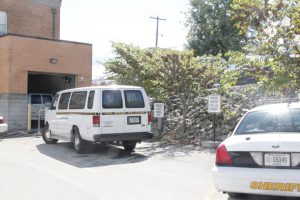 Photo by Greg Bird
Troxell exited the transport van Monday and ran barefoot up the rocky slope in his escape.

Troxell was reportedly clad in a white shirt, with grey sweatpants and was handcuffed at the time of his arrest. He was also barefoot at the time of escape.

Authorities originally thought he may have had an accomplice waiting on a nearby street as security camera footage from nearby businesses show his initial path of escape, but he did not appear on footage from other cameras in the area. But, further sightings of the escapee throughout the day confirmed he was still on his own avoiding capture.

The suspect was spotted later that evening in a wooded area near the Greene Pointe Apartments in Whitley City and more than 10 law enforcement officers joined in the renewed search.

Troxell reportedly had either found or stolen a red shirt to replace the white one he was originally wearing, and had apparently managed to break or cut the chain on his handcuffs.

After more than 2-hours canvassing the woods and surrounding locations, the search was discontinued due to darkness. Officers responded to various possible sightings throughout the night, but as of Tuesday morning Troxell was still at large.

Constable Dustin Ridener located Troxell Tuesday evening in Sawyer and attempted to apprehend the escapee, but the subject fought the officer and managed to flee once again, despite being tased at one point during the confrontation.

Troxell was set to appear in Court for arraignment on three charges of possession of a forged instrument and four charges of theft by deception/ cold checks, but now he can expect additional charges, such as felony escape, fleeing/evading, and assault to contend with.