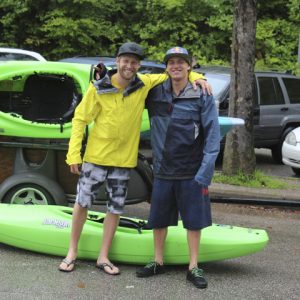 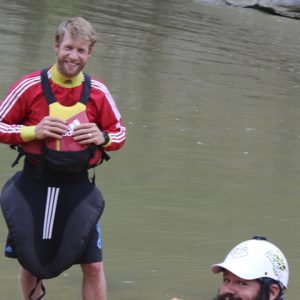 Photos by Eugenia Jones After going through safety drills, Wilmont gives a thumbs up as he prepares to hit the water in his kayak and practices escaping from a capsized kayak. 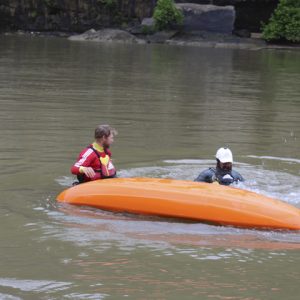 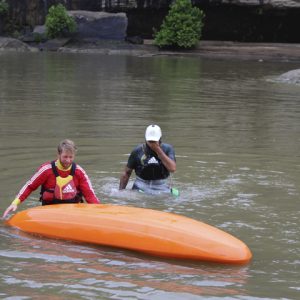 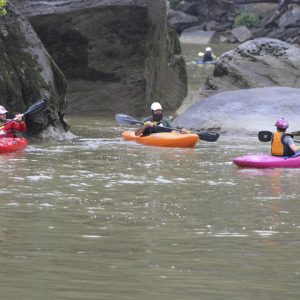 Saturday’s return trip to Cumberland Falls was quite different from the one made earlier this year by competitive kayakers Nick Troutman and Dane Jackson when they triumphantly maneuvered the fierce 68 feet drop of Cumberland Falls.  Using GoPro cameras to film their adventure, the videos went viral receiving more than a million views and tens of thousands of shares.

After successfully maneuvering their plunge over the Falls, Troutman and Jackson, both with Jackson Kayak in Tennessee, were cited with trespassing by park law enforcement.  Although the two claimed to be unaware of the illegality of their dangerous journey over the Falls and despite having spotters and a safety plan in place during their adventure, each of the professional kayakers was placed on the McCreary District Court docket.  After reaching an agreement for the Commonwealth of Kentucky to dismiss the matter in exchange for completion of one day of community service, the pair showed up at Cumberland Falls on Saturday to teach a kayaking class, free of charge and open to the public.

Troutman and Jackson have navigated waterfalls around the world and have years of experience between them.  Both are professional kayakers with Troutman being a world champion.  The kayakers stress safety in their line of work and both adamantly warn against attempts by the public to navigate Cumberland Falls.

Saturday’s classes took place at the beach below the waterfall and went well.   Two classes were taught throughout the day.

“Cumberland Falls is a beautiful place and a great place to learn,” Troutman remarked enthusiastically.  “We had an awesome class and were able to get fairly advanced with some of the participants.  We even worked on peeling out of current.”