The Raiders kicked off the 2016 season in a big way – a 55-8 win over the Jenkins Cavaliers Friday night.

The Lucas Ford era is off to a good start, and now the first-year Coach is working on building off the win toward more wins in the future. 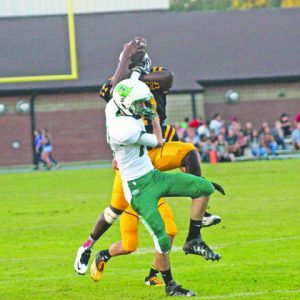 Photos by Chris Hollis Devon Hamilton goes up for a grab. 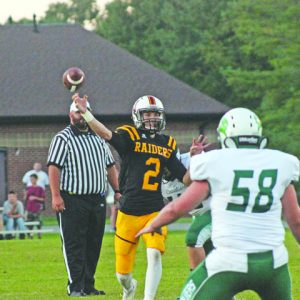 Photos by Chris Hollis Hunter Jones was effiicent as QB, 4/8 passing for 86-yards and one touchdown. 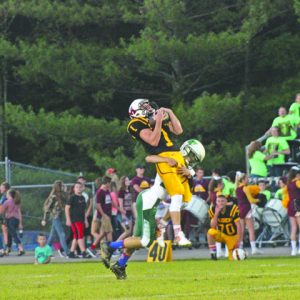 Photos by Chris Hollis Nathan Goins picks off a Jenkins pass at the end of the first quarter, setting up another Raider touchdown. 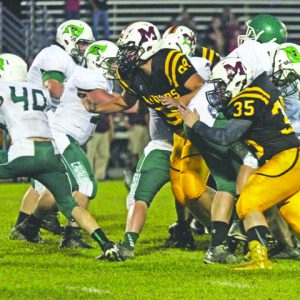 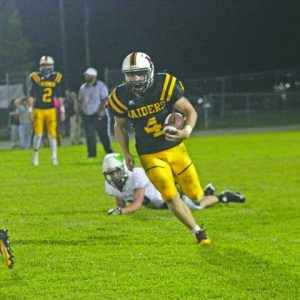 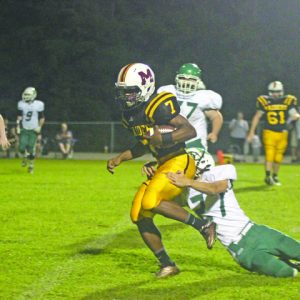 Junior Brandon Troxell led the ground attack for the Raiders, gaining 205 yards on 11 carries and scoring three touchdowns. Hunter Jones, on a night where the ground game was dominant, was efficient at Quarterback, hitting 4 of 8 passes for 86 yards and 1 touchdown.

The Raiders scored on all but one of their possessions in the game and took a 41-0 lead into the half as Jenkins could do little to low the Raiders’ advances.

The Raiders struck on their first drive off a 23-yard pass from Quarterback Hunter Jones to receiver Devon Hamilton, who leapt over a defender at the goal-line to make the grab and put McCreary ahead 6-0 in the first quarter.

Hamilton gave the Raiders their second scoring opportunity on the next series, intercepting a Jenkins pass at the Cavaliers’ 29-yard line.

Three plays later Troxell took the hand-off up the middle, but cut left while shaking off tackles and dove at the goal line for a 24-yard TD run. After a successful 2-point conversion the Raiders had a comfortable 14-0 lead mid-way through the first quarter.

An 11-yard TD run by Nathan Prosser, with 1:34 left in the first, put the Raiders up 21-0, then Nathan Goins grabbed the spotlight with an interception, taking the ball back around mid-field.

Drew Bell’s 44-yard over the shoulder grab of a Jones pass on the first play from scrimmage set up the next score – a 1-yard run from Bell that put McCreary up 27-0 at the start of the second quarter.

The Raiders forced their third turnover of the game on the next Jenkins drive, forcing and recovering a fumble, but the following drive was the only one that stalled in the half – ending after a Raider fumble.

McCreary did bounce back after that miscue by recovering another Jenkins fumble during the next series – recovering the ball on the Cavaliers’ 10. One play later Troxell scrambled across the goal on a 14-yard carry.

Jenkins put together one of their best drives late in the half – a 12-play series that made it all the way to the Raiders’ 5-yard line, but ended with a pair on incomplete passes.

The Raiders took over, deep in their own territory and with little time on the clock, but after a 15-yard pass completion and a sack, McCreary was faced with 2nd and 19 at their own 25 when Troxell wove through traffic on a 75-yard carry to put them ahead 41-0 at the break.

The Raiders added two more scores in the quick second half as the competition clock was running throughout the final two quarters.

Jones scampered in for a 12-yard run, and sophomore Caleb Cox ended the scoring with a 40-yard dash in the closing minutes.

Jenkins scored their only touchdown of the game at the start of the fourth quarter on an 8-play, 80-yard drive, ending with a 10-yard pass completion with 6:55 left in the game.

The Raiders hope to keep their momentum alive Friday night when they host Lynn Camp at 7:30 p.m. at Norm Parsons Field. The Wildcats are coming off a heartbreaking 35-34 loss last week at the hands of Perry County Central.