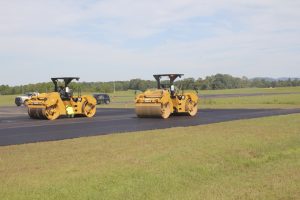 Crews from Hinkle are wrapping up the massive repaving project at the McCreary County Airport this week, fulfilling a promise made last year to fix the cracks and surface of the 20-year old runway.

The project has been a long time coming, and not without its share of controversy.

The public was first made aware of plans to pave the runway when members of the former McCreary County Airport Board approached the Fiscal Court last May to ask for assistance in funding for the resurfacing.

The approximately $660,000 project was to be paid through state and federal grants, but a local match of about $17,000 was required, and the Airport Board, which had been mainly self-reliant since opening in 1968, did not have enough funds on hand to meet the bill.

The project was reportedly deemed an emergency by aviation officials, as the over 20-year old runway was riddled with cracks, and the airport was at risk of losing its FAA designation as a General Aviation airport.

With the Fiscal Court balking at allocating funds so late in the fiscal year, the Airport Board attempted to implement a special tax to generate the funds needed for the repaving, and future planned projects.

The tax was first blocked by an injunction filed by PVA Bruce Lominac and eventually negated by the dissolution of the Board by the Fiscal Court.

While an Airport Advisory Council was created to replace the Board, Judge Executive Stephens stated he did intend to complete the paving project, and a year later that has finally come to fruition.

Stephens also noted the project was set to come in under budget, so Hinkle has agreed to repave the apron adjacent to the runway.

The former Airport Board had further plans in development for the airport, such as adding an additional 1,000-feet to the runway. It was estimated that the additional projects would total about $4.1 million – with much of the money coming, again, from state and federal grants and funds, but it would cost almost $200,000 in local matches over the next three years if undertaken.

It is unclear if the Airport Advisory Council intends to continue forward with the projects at this time.

Not only will the repaved runway improve landings and takeoffs on the 3,000-foot strip, it also paves the way for continued development of the McCreary Aerospace Academy, an idea proposed by Dr. Tim Smith.

The Academy is intended as a learning opportunity for middle and high school students interested in aviation engineering, maintenance and operations.

An informational meeting of the MAA is scheduled for this Saturday, August 27 at 2:00 p.m. at the airport for interested students and their families to learn more about the Academy.