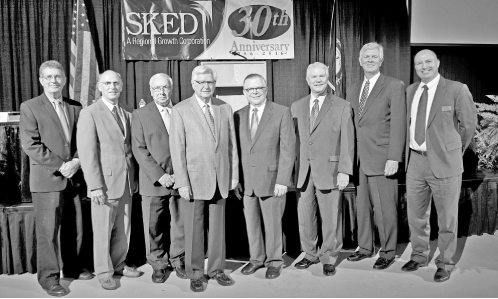 “SKED has helped create 10,500 jobs – that’s 10,500 families that live and work here in southern and eastern Kentucky,” Rogers told the crowd. “SKED is a grassroots effort with local people using our own ideas to solve our own problems. I’m incredibly proud of the small businesses and manufacturing companies that are still thriving today, thanks to the support of this organization over the last three decades.”

Community and business leaders from across Southeast Kentucky gathered to commemorate the regional nonprofit economic development organization’s 30th year in business and salute the key partners who’ve played a role in its successes.

SKED was incorporated in 1986 by a group of leaders, led by Congressman Rogers, to encourage a more regional effort to attract jobs, by developing partnerships among community leaders to give the Fifth Congressional District a singular voice. Rogers had the vision and called a group of leaders together, from across the region, to develop a plan to put in place.

Four of SKED’s founding board members: L. Ray Moncrief, of London, Ky.; the Rev. John Chowning, of Campbellsville, Ky.; Bob Mitchell, of Corbin, Ky. and Michael Hayes, of Lexington, Ky., were on hand to share their thoughts and memories of SKED’s history and successes. Other founding members include: Cy Waddle, of Somerset, Ky.; the late Paul Dunnington; the late John Phelps and the late Roy Houser.

“SKED’s successes, over the past 30 years, are planted firmly on the foundation built by the men who envisioned it in early 1986, and those who’ve partnered with the organization throughout its history to pool resources, share ideas and work together to lift its residents up as a region,” Traver said. “I am incredibly honored to follow in the footsteps of those who came before me. It’s my goal to lead this organization, along with the guidance of our incredibly talented board of directors, in the coming years.”

Traver also cited the support of key state and federal funding agencies that believe in SKED’s mission and provide the foundation for its loan programs, Entrepreneurial SMARTS small business training program and other community development projects such as Valley Oak Technology Complex and the Somerset Rail Park.

“Were it not for our partners at the U.S. Department of Agriculture, Appalachian Regional Commission, the U.S. Small Business Administration and others, our resources to assist business owners and communities would be limited,” Traver added. “We are only as successful as the people and businesses we’re able to help.”

He also thanked other nonprofit lenders in the region for their partnerships over the years: Kentucky Highlands Investment Corporation, Mountain Association of Community and Economic Development, Community Ventures and more.

Some of the entrepreneurs who SKED has helped to start up or expand their businesses were on hand for the celebration. One of those was McCreary County entrepreneur JC Egnew.

Egnew is President of Outdoor Venture Corporation (OVC) in McCreary County. OVC is McCreary’s largest manufacturer, providing more than 200 jobs in the community. The owner of the tent manufacturing company is also active in a number of community service projects and philanthropic efforts in the region.

The Stearns businessman has partnered with SKED on a number of job-creating projects over the past 30 years. “SKED has been a great partner,” Egnew said. “Anytime we have an issue where we have a need for financing they’re always ready to step up in some way.”

Since 1986, SKED has successfully assisted more than 300 business owners, like Egnew, to locate or expand their operations in Southeast Kentucky. SKED projects employ more than 10,500 workers and have invested an estimated $500 million back into the region.

For example, SKED worked with company officials at Rajant Corporation to establish a facility in Morehead, Ky. Rajant, a pioneer in providing multi-frequency wireless solutions, is creating 28 jobs and investing $762,000 in the East Kentucky community. In Pulaski County, the nonprofit assisted EOS USA in locating in Valley Oak Technology Complex. The customer service call center will serve as the company’s national flagship location.

SKED’s direct loan programs assist business owners in expanding, locating and financing equipment purchases. To date, it has provided 342 direct loans totaling $57 million in the region. These businesses have created 8,056 jobs and leveraged more than $315 million in private investment throughout the region.