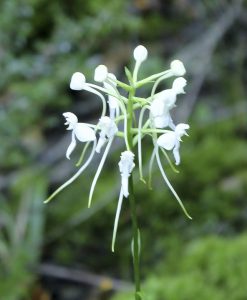 At least three sites in McCreary County are adorned with the fragile beauty of the white-fringeless orchid (Platanthera integrilabia), a perennial herb currently proposed for placement on the federal listing of threatened species.  A decision regarding the proposed listing is expected between now and early summer of next year.  The plant is considered endangered in Kentucky.  The plant grows up to 24 inches tall with a solitary, pale green stem growing from a tuber.  The plant blossoms with white flowers from late July through September with small fruit maturing in October.

The white-fringeless orchid thrives in areas that are wet and boggy often at the heads of streams.  It is often, but not always, associated with peat mosses in shady areas.  The sensitive plant has suffered due to changes in its habitat created by road construction, residential and commercial construction, ATV traffic and other activities that change the soil and water flow in its habitat.

The reporter acknowledges use of https://www.fws.gov/cookeville/pdfs/WhiteFringelessOrchid15.pdf.