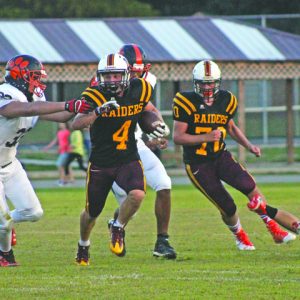 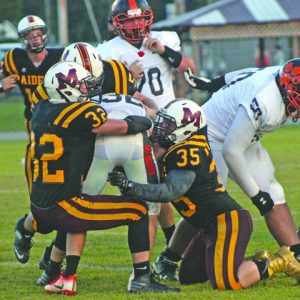 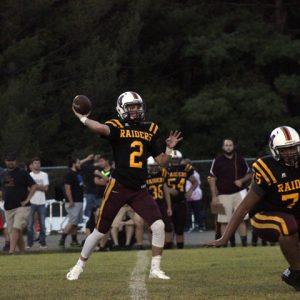 The Raiders dug themselves into a hole early during Friday night’s game against Lynn Camp but fought hard to climb out, and gave themselves a chance for a win.

But a peculiar series of off-field events contributed, at least in part, to a 38-36 loss.

With the Raiders clinging to a 1-point, 36-35 lead with less than three minutes to play, an unsportsmanlike conduct penalty – against the McCreary Central Band, gave the Wildcats a clock stoppage and better field position after the Raiders appeared to have stopped their drive cold.

The band was flagged after continuing to play music on the sideline when the ball was in play: something they had been cautioned against by game officials at least three times.

Lynn Camp would use that opportunity to move the ball forward to the McCreary 8-yard line over the next 7 plays, and with 2.7 seconds left on the clock – kick a game-winning field goal for a 38-36 win.

It is easy to point at the penalty as the cause of the loss, but other on-field factors certainly played their part as well.

Three turnovers in their first three possessions allowed the Wildcats to take a 21-0 lead: An opening drive interception was returned for the first touchdown. A fumbled kick-off return – leading to Lynn Camp’s second score. And a botched snap on a punt attempt giving the Wildcats the ball deep in Raider territory.

On Lynn Camp’s drive previous to the penalty, an unguarded receiver easily caught a 37-yard touchdown pass that allowed the Wildcats to pull within one-point.

That play was similar to one in the first quarter when Lynn Camp took a 13-0 lead after the Raiders failed to cover the same receiver, who scored uncontested on a 35-yard pass.

Coach Lucas Ford was diplomatic discussing the loss and the controversy surrounding it.

“There were a lot of factors that played in to the outcome,” he said. “We take ownership of the loss and will move on from it. It was our loss.”

“The band works hard, and they are out there every game to support us, it is our job to overcome adversity.”

Despite the early misfortune, the Raiders fought back hard.

With 5:30 left in the first quarter Ryan Jones, stepping in as the quarterback for the series, ran an option play at mid-field, running down the right side. Jones was about to be caught from behind when the lanky runner lunged forward and hit the pylon at the corner of the end-zone with the ball for McCreary’s first score of the game.

Brandon Troxell punched in the two-point conversion attempt to cut the deficit to 13, 21-08.

Two series later, the Raiders closed the gap even more, aided by a roughing the passer penalty against Lynn Camp.

McCreary was facing 3rd and 10 at their own 20 when QB Hunter Jones was incomplete on a pass attempt. But a Lynn Camp defender struck the QB after the ball was released for a 15-yard penalty and a new set of downs for the Raiders.

McCreary took advantage of the new lease on life by marching down the field, highlighted by a 42-yard pass completion from Jones to Troxell.

Nathan Parriman capped off the drive with a 1-yard TD run and McCreary was just one score behind, 21-14.

Lynn Camp would answer with a touchdown on their next series, but McCreary came right back with a 61-yard scoring drive, ending with an 8-yard Troxell run to pull within 5, 27-22 near the end of the first half.

After their first drive stalled within sight of the goal line, and stopping Lynn Camp on their first possession of the second half, McCreary took the lead with 4:02 left in the third quarter.

Big runs from Troxell and Drew Bell put the ball at the 1, and Parriman carried it across for a 30-27 lead.

But on the opening play of the next series Lynn Camp fooled the Raiders’ defense with a       receiver near the sideline – unaccounted for on the field. He would catch a 37-yard TD pass to cut the Raiders’ lead down to 1 with just over 5 minutes remaining.

McCreary’s next series ended when it came up half a yard short on a fourth-and-1 play, which could have allowed them to run the clock out safely.

But Lynn Camp took over on their own 31, setting up the dramatic finish.

“We have to get off to a faster start,” he said. “We can’t dig ourselves such a big hole like that.”

“But the effort was good all game. The kids prepared well, worked hard to get ready for the game, and really bought in to what we were trying to do.”

Next week the Raiders travel to Clinton County for a re-match against the Bulldogs.

Ford said the Raiders were a little banged up after the physical contest Friday night, but were already turning their attention forward to the next game.

Last year Clinton County managed to withstand a Raider comeback and hold on for a 30-25 win at McCreary Central.

The Bulldogs enter the week with a 2-0 record: coming off a 43-8 win over Trimble County Friday night and a 57-26 win over Picket County to open the season.