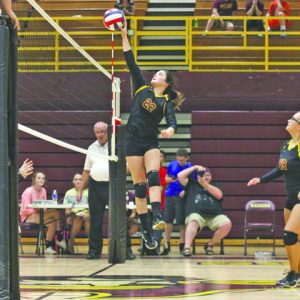 Photos by Chris Hollis Brooke Stephens goes for a kill. 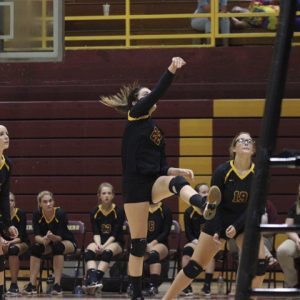 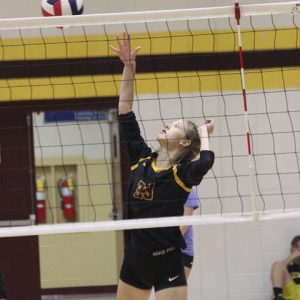 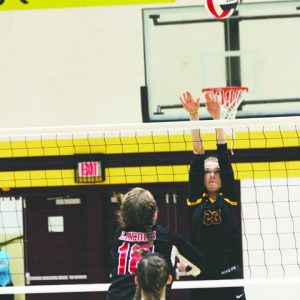 Photos by Chris Hollis Caitlyn Strunk goes for a block against Lincoln County. 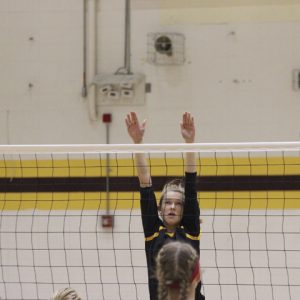 McCreary would fall behind early in Monday’s opening set against Lincoln County 5-0 before senior Brooke Stephens tapped the ball just over a defender to put the Lady Raiders on the board.  Central would struggle to score early  getting only two points off of their serve through the first six side-outs, allowing the Lady Patriots to build a 17-9 lead.

Central would finally start to build some momentum as senior Aryn Stephens landed two aces in a five point run to pull the Lady Raiders to within three points at 17-14.  Lincoln caught a break to end the run getting the ball to drop on the line as McCreary was letting it go thinking it would be out of bounds.

Lincoln would then add two more points to make it 20-14 and then the two teams would trade points followed by a Lady Raider point to get the serve back facing a 21-16 deficit.  McCreary would then score on three consecutive points including an ace delivered by Brooke Stephens to tighten the score at 21-19.

After a Lady Patriot point McCreary was immediately able to regain the serve trailing 22-20.  With Stacey Vanover at the service line the Lady Raiders pulled to within a point after a long volley and then Vanover evened the score with a serve that clipped the top of the net and fell in for an ace to make it 22-22.

Following a Lincoln timeout Vanover’s serve fell out of bounds giving the lead back to the visitors. Another long volley ended with Lincoln hitting the ball into the net to tie the game back up at 23-23.  Central was unable to capitalize however and Lincoln immediately won back the serve and then scored off of their serve to take the set by a 25-23 score.

After outscoring their opponent 9-5 in the latter stages of the first set McCreary came out strong in the second and jumped to a 5-1 lead, scoring four times behind the serve of Jada Genoe, including one ace.  The lead would continue to grow to 7-2 and eventually 9-5 before Lincoln began to regain the momentum and outscore the Lady Raiders 7-1 to give them a 12-10 lead.

The teams traded scores until it was 13-12 and Lincoln won back the serve to start off a run of seven unanswered points which included three aces delivered by Taryn Johnson giving her team a 20-12 advantage.  McCreary cut the lead back to six with two quick points but the Lady Patriots answered back with consecutive points to take a commanding 22-14 lead.

McCreary was able to win back the serve and then add two more points with Kourtney Brock serving to trim the lead to 22-17 but Lincoln would close out the set and match with three straight points to end the set at 25-17.

McCreary followed the loss with a 2-0 defeat at the hands of Russell County Tuesday to fall to 7-11 on the season.

The Lady Raiders’ next six matches will all be at home starting with North Laurel this evening. Next Thursday they will host Cumberland County, followed by Berea on September 13 and Wayne County on September 15.