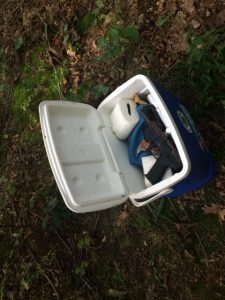 Photo by Greg Bird Officers found several guns that were reported stolen hidden in the woods after a traffic stop. 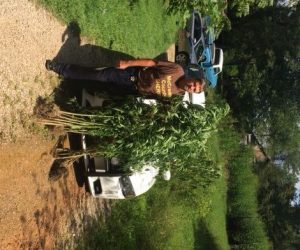 McCreary County Sheriff Randy Waters confiscated 25 marijuana plants off Betty Jones Road last week. The Sheriff stated the plants were discovered after officers from the Monticello Police Department were in the area to serve a warrant when they spotted the plants. The officer notified the Sheriff, who obtained a search warrant and removed the plants. The case is still under investigation and the Sheriff stated he would be seeking a Grand Jury Indictment in the case.

In second case the Sheriff’s Department recovered a cache of guns reported stolen from an Osborne Creek residence last week. Sheriff Waters said officers were performing extra patrol after residents in the area reported suspicious activity. After a traffic stop the guns were located hidden in the woods on the side of the road.

In related news, Sheriff Waters released the following data of call volume and arrests through the McCreary County Sheriff’s Department.

Through the end of July this year officers responded to 4,209 calls and arrested 564 individuals.

Sheriff Waters stated he attributes the decrease in call volume and increase in arrests to working investigations leading to federal warrants against suspects in drug-related cases.

“We worked hard to get some of the worst repeat offenders off the streets by working with other agencies and obtaining federal indictments against them,” he said. “As these investigations continue, we expect more and more arrests as a result.”