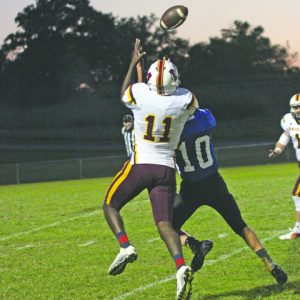 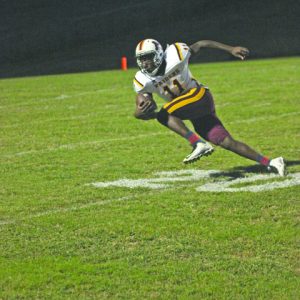 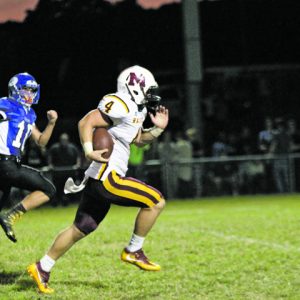 Clinton County saw a lot of Brandon Troxell’s back as he rushed for nearly 300 yards. 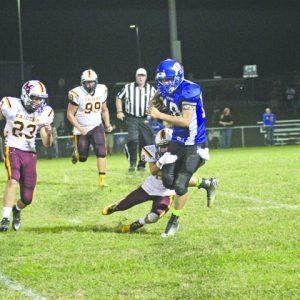 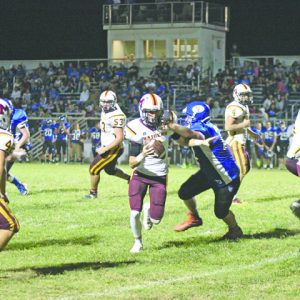 Brandon Troxell continued his strong start to the 2016 football season by leading the Raiders to a definitive 68-40 win over Clinton County Friday night.

Troxell gained 297-yards rushing, his third straight game with more than 200-yards, and added three touchdowns to help power the Raiders to the win. Quarterback Hunter Jones finished the night 9 of 19 passing for 193-yards and 4 touchdown passes. Ryan Jones added a touchdown pass of his own as McCreary amassed 561 yards of total offense to Clinton County’s 387.

The Raiders shrugged off last week’s loss with ease, taking a commanding 24-0 lead to start the game, then rolling on to a seemingly effortless win and a 2-1 record to start the season.

Troxell put the Raiders ahead early, scoring on their first play from scrimmage in the first quarter on a 58-yard run for an 8-0 lead.

Nathan Goins helped double the lead on the next series with a 15-yard TD reception, his first of three on the night.

McCreary increased their lead to 24-0 on another big run from Troxell, a 51-yard scramble to open the second quarter.

Clinton County finally got on the scoreboard with a 39-yard TD run, but failed the 2-point conversion and trailed 24-6.

McCreary would add two more scores in the first half: a Devon Hamilton 15-yard TD catch and a Goins 13-yard catch from Ryan Jones. The Bulldogs managed one additional score as well on a 16-yard run, but trailed 38-12 at the half.

On the Raiders’ first drive after the break, Troxell almost added to his totals with a 50-yard run for a score that was called back due to a holding penalty. Goins, however, kept the drive alive with a 45 yard catch and run for a touchdown and a 46-12 lead.

After a Clinton County score, Hunter Jones connected with John Cash for a 6-yard TD pass and a 54-20 advantage.

Hamilton came through defensively on the next drive, intercepting a Clinton County pass and returning it 30-yards, setting up another score. The Raiders would advance to the 8-yard line, when Jones ran a keeper, but lost the ball at the 2-yard line. The ball was batted around before Hamilton picked it up in the end zone for the score.

Clinton County would open the final quarter with a TD, but the Raiders responded with another big run from Troxell: a 50-yard scramble up the middle and a 68-28 lead.

The Bulldogs would tack on two late scores, aided in part by a McCreary fumble in the closing minutes, but were never able to get in to contention.

The Raiders’ 2-1 start is their best since 2009, when McCreary went 3-0 to begin the year, eventually winning 6 of their first 7 and finishing 7-4 overall.

This week the Raiders travel to Providence, Indiana for a rematch against the Pioneers.

Last year the Pioneers dominated McCreary, winning 55-0, and holding the Raiders to only 4-yards of total offense, but this year could play out a lot different.

McCreary is off to their best start in years, with their offense hitting on all cylinders, while the Pioneers are off to a slow start.

Providence enters the game with an 0-3 record, having been outscored 83-27 so far this season.