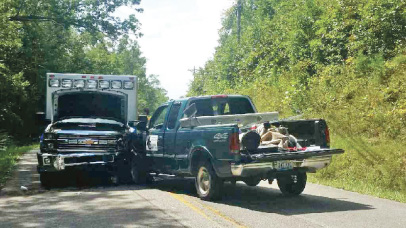 One person was injured and could face charges after a Sunday afternoon accident involving a McCreary County Ambulance.

According to McCreary County Sheriff’s Deputy Odell Smith, the ambulance was traveling eastbound on popular springs road, returning from a Patriot’s Day ceremony at the American Legion, when it was struck by a truck, driven by Shannon Howard Newton, 35, of Stearns.

Deputy Smith said Newton was traveling westbound when it appeared the rear wheels came off the roadway. As the driver tried to regain control of the vehicle, it began to skid, traveling 90-feet before striking the left-front of the ambulance.

Newton suffered minor injuries in the accident, and was transported to Lake Cumberland Regional Hospital. Upon her release, Deputy Smith said, she was arrested by the Pulaski County Sheriff’s Office on outstanding warrants.

Deputy Smith said the investigation is continuing, but charges of OUI, Reckless Operation, Unauthorized Use of  Motor Vehicle and Driving on a Suspended License are pending against Newton.

The Ambulance was badly damaged in the accident and will remain out of service until repairs can be made, McCreary County EMS Director Jimmy Barnett said Monday.