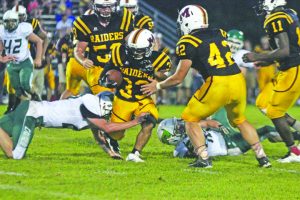 After a disappointing 55-6 loss Friday night, the Raiders are eager to put that game behind them and have turned all their attention on this week’s opponent – the Berea Pirates.

The Raiders fell to the Providence Pioneers Friday night in Clarksville, Indiana, a nearly four-hour bus ride for the team.

Brandon Troxell, the Raiders’ leading rusher, totaled 153 yards on 26 carries, and scored McCreary’s lone touchdown in the game. Providence outgained the Raiders on the ground as the defense could do little to stop the high-powered assault.

Coach Lucas Ford, who inherited the game on the schedule, said simply that he hopes the team put that game in the past and focuses more on the successes they have already accomplished.

The Raiders should notch their third win of the season Friday night when they are scheduled to host the Berea Pirates.

Berea, who like the Raiders a few seasons ago, is dealing with a limited roster, are 0-4 on the season and have been outscored 186-0 over their first four games.

Last year McCreary knocked off the Pirates 46-15 in Berea.