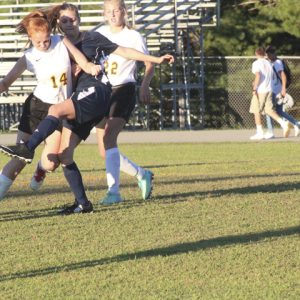 Photo by Chris Hollis Laura Hamlin fights for control of the ball during the Lady Raiders’ 2-1 win over Knox Monday. 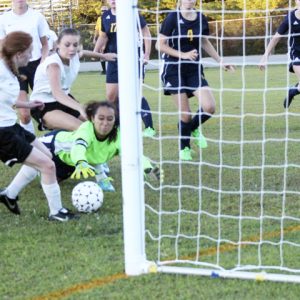 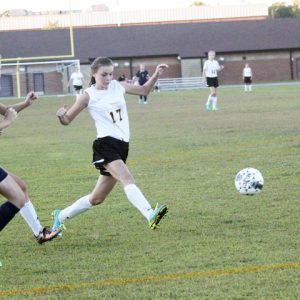 McCreary Central’s Lady Raider Soccer pulled out an exciting victory over Knox Central Monday evening, earning them their third win of the season.

Courtney Owens kicked the winning goal with just under three minutes left in the game to break a 1-1 tie after a wild scramble in front of the goal following a McCreary free kick.

After a scoreless first half, McCreary was able to get on the board 7 minutes into the second period when Laura Hamlin launched a shot from the left wing. The shot sailed over the back-peddling Knox Central keeper and fell just under the cross bar into the far side of the goal for a 1-0 lead.

It appeared that the single goal may have been enough as the Lady Raider defense kept the Lady Panthers out of scoring range most of the game. McCreary dodged a bullet early in the second half when Knox Central was awarded a penalty kick, but the shot was not wide enough to get by Lady Raider keeper Gabrielle Wisner, who easily made the catch off the line drive attempt.

Knox would draw even, however, with just over 9 minutes remaining when a low roller got by Wisner into the left corner of the goal. Wisner appeared to have the ball played, but the uneven turf around the goal line caused her to twist a knee and fall before getting to the ball. The injury was significant enough to stop play for several minutes and Wisner was not able to continue.

The Lady Raider would break the deadlock about five minutes after play resumed. Riley King started off the sequence with a free kick from the left wing. Her kick got over the defensive wall of Lady Panthers, but appeared to be an easy stop at the goal. The keeper misjudged the ball, and instead of securing it on the fly the ball bounced in front of her and then caromed off her shins. MaKenzi Cox charged in to play the rebound while the keeper raced out trying to clear the ball from the goal area. The two players arrived simultaneously, and neither was able to solidly strike the ball. As the two collided the ball was knocked back and began slowly rolling toward the goal while the keeper and Cox began to give chase while battling each other for position.

With the ball about two feet from the goal line the goalie made a diving attempt to get her hand on the top of the ball and pull it in, but just as her hand got to the ball, so did the left foot of Courtney Owens, who had charged in from the right side. Owens connected and drove the ball in to the net, just ahead of the keeper’s glove.

Knox challenged that Owen kicked the ball out of the keeper’s hands, but the referee overruled the protest and awarded the McCreary goal.

The win gave the Lady Raiders their third win of the season.

Thursday night the Lady Raiders will host Somerset, and Pulaski County in Tuesday. Both matches start at 6:00.