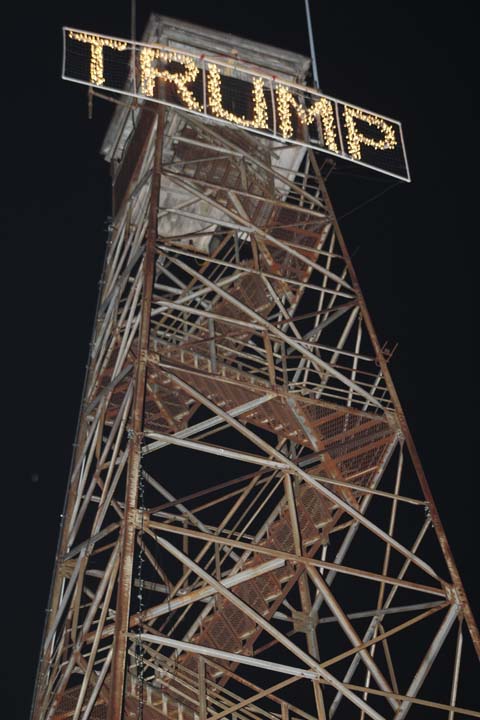 Regardless of political party affiliation, one has to admit it’s rather exciting when an interesting, historical McCreary County landmark, currently referred to as “Kentucky’s Trump Tower,” draws visitors from the surrounding area and becomes the topic of a Twitter post by Republican Presidential candidate Donald J. Trump.

That is exactly what is happening to the historical Stearns Fire Tower overlooking McCreary County for over eighty-two years.   Located just off HWY 1561 at the end of Stearns Tower Road, the tower was built on Sunset Rock in 1934 by CCC workers at the highest point of McCreary County.  Although no longer in use for spotting forest fires, the tower has always been a point of interest for McCreary Countians.

The current owners of the fire tower, Nolan and Sondra Johnson, are both avid Trump supporters.  With their tower and their political viewpoints, the two couldn’t resist the idea of designing McCreary County’s very own version of New York City’s Trump Tower.  Fashioning the letters “TRUMP” in a frame and highlighting them with outdoor lights, the two used a hundred year old pulley to raise the framed letters to the top of the 110 -foot fire tower.   At dark, they plugged in the lights and “Kentucky’s Trump Tower” lit up.

The rest is history.  As people began to see the tower on Facebook and hear about it by word of mouth, visitors began arriving in Stearns to see the landmark and learn about its history.  Republican nominee, Donald J. Trump, issued the following Twitter post after seeing photos of the tower posted on Facebook.

“This is amazing-thank you!  I can now say that there is a Trump Tower-in Kentucky!  Support like this-known as the MOVEMENT-has never been seen before.  It is time to MAKE AMERICA GREAT AGAIN!” 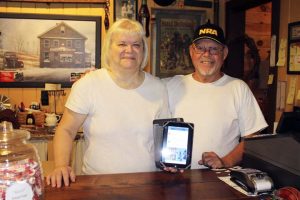 Needless to say, Nolan Johnson is having a blast as he shares the rich history of the Stearns Fire Tower with those who come to visit.

Originally, the United States Forest Service leased the property from Stearns Coal, using the tower to spot forest fires.  After Stearns Coal went out of operation, the tower was abandoned giving Richard Burke the opportunity to purchase it. Later, in 1988, Burke sold the tower and six acres of surrounding property to the Johnsons for $10,000.  Nolan remembers the day he bought the property as if it were just yesterday.

“I always said I would own that property someday,” Johnson said with a smile.  “It finally happened.  Sondra and I were living in Cincinnati when someone told me the Stearns Fire Tower was for sale.  I drove down to see the man about buying it.  The seller was a whittler, and he whittled as we talked.  I told him to hang on to the land and let me drive back to Ohio to get the money.  That man just kept whittling and told me to sit down.  We made and signed a land contract right there!”

The Johnsons have always wanted to restore the fire tower and develop it into a historical, tourist attraction.  Sondra points to the scattered picnic tables and trails around the property.

“It’s hard to come up with the funding needed to restore the tower properly,” she remarked.

In the meantime, the Johnsons will continue sharing their fire tower treasure and its rich history with those who visit during its pre-election notoriety.  The lights will be on nightly (7:45 p.m.-11:00 p.m.) until the election rolls around.  If Trump loses, the lights will come down, but Nolan said he may leave the lights shining if Trump moves to the White House.

“After all, this is probably the most ‘deplorable’ thing I’ve done,” Nolan said with a hearty laugh.