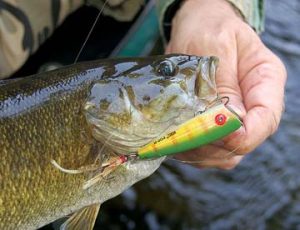 FRANKFORT  – Shorter days and yellowing leaves are about the only ways you can tell it is the third week of September. Temperature wise, it feels like August lasted six plus weeks.

“We are 10 degrees behind, water temperature wise, than usual for this time of year,” said David Baker, Central Fisheries District biologist for the Kentucky Department of Fish and Wildlife Resources. “The water is usually cooler by now.”

Although the lingering summer has worn out its welcome, there is a silver lining. The peak of the topwater bite for stream smallmouth bass is just beginning, not winding down.

“I’ve fished Barren River the last two weekends and absolutely waylaid them on a buzzbait,” Baker said. “We caught two over 18 inches long this past weekend. I feel confident throwing topwaters on streams for smallmouth bass until the temperatures drop all the way down into the low 60s.” Daytime water temperatures on central Kentucky’s Elkhorn Creek ranged in the low to mid-80s this past week.

Early fall creates optimum feeding conditions for stream smallmouths, putting them on the prowl and turning them more aggressive. “We are in the best time of the year for food resources on streams, and the smallmouth bass take advantage and feed heavily,” Baker said.

The wet summer brought good flow to streams across Kentucky, providing slightly lower water temperatures with good amounts of dissolved oxygen. “The fish are really, really heavy right now, not the usual end of summer fish,” Baker said. “They were not so stressed during the late summer this year.”

Baker goes big with his topwater presentations in early fall, flying in the face of stream smallmouth orthodoxy that dictates small lures with subtle actions.

Baker targets the shady, shallow side of the creek bend; a spot ignored by knowledgeable stream smallmouth anglers for most of the year. “Longear sunfish use these spots in fall and the smallmouth are feeding on them,” he said. “Small longears are a good food source for stream smallmouth.”

In addition to a buzzbait, a floating/diving minnow such as the venerable Rapala works in these spots as well. “My buddy has been catching a bunch of them on the silver with black back classic Rapala, the one that is about 4 1/2 inches,” Baker said. “The water clarity must be good for the Rapala to work well.”

Walking baits such as the Zara Spook or Puppy, designed for the “walk the dog” retrieve work well fished over the shallow, shady side of the creek now. Walking baits move side-to-side by gently jerking the rod tip from one side to another. Stream smallmouth can’t stand this retrieve and often hit walking baits with tremendous aggression in early fall. The best colors are bone, silver plate (chrome) and flitter shad.

“When casting a topwater lure for stream smallmouth, throw as tightly to the bank as possible,” Baker said. “Throw it a few feet past the target and bring the topwater lure back to it. If you throw it on top of them, they’re spooked.”

This also applies to the other topwater hotspot in early fall: the deeper pockets and eddies just above a riffle. Those with logs, large rocks or undercut banks nearby produce best. Avoid fishing topwater lures in the sections of the stream with the strongest current.

From the riffle area, cast chugger or popper-style topwater baits, such as the Chug Bug, Pop-R or Skitter Pop, upstream of the eddy, log, undercut bank or rock. Gently jerk the rod with the rod tip down to make the convex face of the lure pop and splash water. Don’t over work a chugger for stream smallmouth. Topwater propeller baits such as the Baby Torpedo or a floating/diving minnow lure also work well in this situation.

When the light dims at dusk to the point where it is hard see well enough to tie on one last lure for the day, choose a black 1/8-ounce Jitterbug. Cast it above stream drops at a 45-degree angle and retrieve it just fast enough to make the lure gurgle. Smallmouths sometimes just sip it from the surface or hit with a force that leaves you shaking.

“There is nothing more exciting than a stream smallmouth blowing up on a topwater,” Baker said. “It will stop your heart a bit.”

Author Lee McClellan is a nationally award-winning associate editor for Kentucky Afield magazine, the official publication of the Kentucky Department of Fish and Wildlife Resources. He is a life-long hunter and angler, with a passion for smallmouth bass fishing.