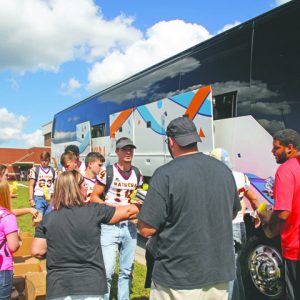 The team got special treats before boarding a charter bus for the extended bus ride to Inez. 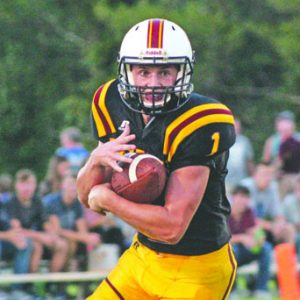 File Photo: Hunter Jones and Nathan Goins had big nights for the Raiders in their 40-6 win over Sheldon Clark. 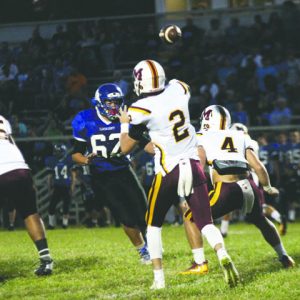 File Photo: Hunter Jones and Nathan Goins had big nights for the Raiders in their 40-6 win over Sheldon Clark.

Hunter Jones’ arm led the Raiders to a 40-6 win over Sheldon Clark Friday night, the second in a row for McCreary, and their 4th win of the season so far.

Apparently well rested after the booster club paid for a tour bus to take the team on the three and a half hour trip to Inez, the Raiders cruised to an easy win over the Cardinals: their third blowout win of the season and second straight where they have only allowed their opponent to score only once.

Jones completed 12 of 16 passes for 253 yards and 3 touchdowns as McCreary took to the air against the Cardinals.

On the ground Brandon Troxell did most of the hard work, churning for 101 rushing yards on 12 carries and scoring one touchdown.

This week the Raiders will host Pineville, the first of back-to-back home games for the squad. The Mountain Lions enter the game with a 2-3 record and are coming off a 37-18 win over Cumberland Gap.

The Raiders and Mountain Lions have squared off 10 times over the past 11 years with the Lions holding an 8-2 edge. The last McCreary victory over Pineville came in 2009, when the Raiders rolled over the Lions 40-24.