Photos by Eugenia Jones
During a recent flight lab at the McCreary County Airport, Tim Smith and his McCreary Aerospace Academy students are shown with excited parents, grandparents, and volunteers. Smith urges community members to get involved with the airport. Several community events are planned in the near future.

“He’s got it, he’s at 3,000 feet and his vertical level is at 0!” exclaimed middle schooler Logan Creekmore as he watched fellow student Shane Meadows navigate a perfect ascent on a flight simulator during Saturday’s flight lab at the McCreary County Airport.

Even more amazing than the students’ excitement and interest during the lab is the fact that these students and twelve others like them are participating in the aerospace career preparatory program during their free time and, as of now, without school credit.

“They are focused and engaged,” instructor Tim Smith said with a smile.  “Notice that I don’t have to stay after them to do this.  They are here on their own time for something that is academic and meets Kentucky’s Program of Studies.  It’s wonderful.  Hopefully, we can work with the Board of Education to help them eventually get credit.”

Now just a few weekends into the program, the students have already prepped a Cessna 152 aircraft, getting it ready for its annual inspection with a certified inspector.  If things go as planned, the students will build their own rv-12 aircraft before next summer. 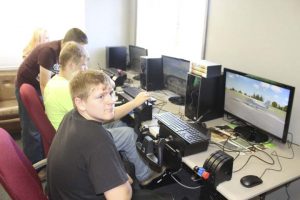 During a recent flight lab at the McCreary County Airport, Tim Smith and his McCreary Aerospace Academy students are shown with excited parents, grandparents, and volunteers. Smith urges community members to get involved with the airport. Several community events are planned in the near future. 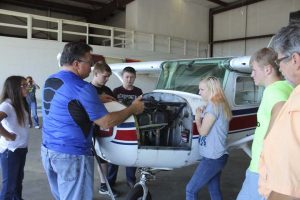 With fourteen students currently in the program, and Smith planning to add more interested youth until October 15, the McCreary Aerospace Academy has taken wings.  Each weekend, the students work on labs allowing them, throughout the year, to get a taste of aircraft maintenance, flight, aeronautic engineering, and space science.

Additional events planned for the year include:  a student cleaning party with students working to clean the hangar, a movie night at the airport (Friday, October 14 at 7:00 p.m.) for students and community members featuring Jimmy Stewart’s “Spirit of St. Louis” and popcorn, a fall Education Open House, Aviation Day Fly-In for the community, and two middle school aerospace camps in the summer.

Smith, who is instructor and coordinator of the Academy and its educational aspect, is also working with the airport board and county officials to make the airport more conducive to economic development within the community.

“It all has to be done in steps,” Smith commented.  “First, we have to make this airport pilot friendly.  To do that, we need to be inspected to sell fuel.  Then, I’d like to get students working to make these rooms more inviting to pilots.  We’d like to put a tourism section, an airport history wall, and a McCreary Aerospace Academy wall in the front room so pilots see attractive displays as soon as they walk inside.  The lounge could have a research area for pilots to do flight planning.  It’s obvious that people have put a lot of hard work into this airport throughout the years.  Now, we just have to make it pilot friendly to draw more planes and pilots.  When that happens, this airport can thrive.  We’re all working together to make that happen.”

Once the airport is selling fuel and more “pilot friendly,” Smith foresees establishing airport shuttles for transporting pilots and their fly in guests to restaurants and local scenic attractions.  Logical next steps would be the establishment of scenic flight opportunities for tourists and use of the thriving airport as a recruiting tool for attracting businesses and industry to the area.

McCreary County Airport Board Chairman Robert Spradlin, the sole original board member, is in total agreement.

“I’ve been with the airport since its start in 1977,” Spradlin remarked by phone.  “I was there when it was nothing but gravel and trees.  A group of us volunteered for years, with no help from the County, to get it where it is today.  We depended on grants, outside funding, donations, and a lot of hard work often using our own equipment and fuel to keep the airport growing.  A lot of people don’t know that side of the story.  I’ve seen it come a long way in my lifetime.  I was there when we blacktopped the runway, added lights, hangars, and buildings.  I, along with others, have been a part of building the airport from just a gravel runway to what it is today.”

Spradlin is supportive of the Aerospace Academy and plans for the airport’s future.  He is especially hopeful the airport will be able to sell fuel.

“We, as the volunteers who maintained and kept the airport alive throughout the years, always wanted to see it bring tourists and economic development to the County,” Spradlin remarked.  “We were hindered in what we wanted to do by not having funds and support from the County.  The airport always had to be self-sufficient.  We did what we could on our own just to make improvements and keep the airport going.”

Spradlin looks forward to seeing a classroom set up on one of the airport pads for use by the McCreary Aerospace Academy students.  As someone who loves aviation, Spradlin hopes and prays the program is successful.

“I’m proud of the airport,” Spradlin reflected.  “I give God the credit.   I’m so thankful He blessed me to be part of it, help with it, and watch it grow.  I want to see it continue to grow.  Tim (Smith) has come in to help and maybe I’ll be able to see it bloom before I leave this world.”

Those interested in the airport can attend monthly board meetings on the second Tuesday at 7:00 p.m. at the McCreary County Airport.  Airport board members include Chairman Robert Spradlin, Tim Freels, Jackie Lay, Ray Wright, and Roger Phillips.