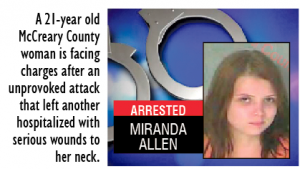 McCreary County Sheriff’s Deputy Odell Smith stated Miranda Allen, 21, is accused of slashing another woman’s throat early Saturday morning, in what could be a drug-related crime.

The incident began to unfold around 4:00 a.m. Saturday when a blood-soaked victim, identified as Jamie Lynch made her way to McCreary County EMS with a significant wound to her neck.

Deputy Smith described the wound as a deep slash that crossed the entire neck and one shoulder.

Barely able to speak, the victim did manage to inform emergency personnel and officers the identity of her attacker and where it took place.

Officers responded to the residence on Bill Slaven Road in Whitley City where they found a pocket-knife with blood-stains, believed to be the weapon, blood on a chair and two doorways. Prescription medication, marijuana and drug paraphernalia were also found in the house.

The suspect had fled the scene, but officers caught up with her on US 27 around 6:30 a.m. that morning near the scene and took her in to custody.

During the subsequent interview with police Allen admitted to the attack, stating at one point: “I slit her throat,” and that she felt no remorse for her actions. She also stated her belief that she had killed her victim.

Two other individuals, who were believed to be in the residence at the time of the attack were also interviewed and corroborated some of the details of the attack.

Allen was charged with Assault 1st Degree, the most serious of assault charges and could carry a sentence of 10-20 years if convicted.

Lynch was transported to the University of Kentucky Medical Center for treatment of her injuries.

The investigation is continuing and the case is expected to be presented to the McCreary County Grand Jury for a possible felony indictment.