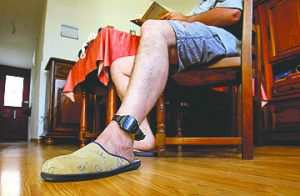 In the wake of a Scott County, Tennessee Judge suspending the use of electronic monitoring devices, it appears two local Judges have followed suit, at least until some questions could be answered regarding the legality of the practice.

The move came after an investigative article by Knoxville News Sentinel reporter Jamie Satterfield alleging the Tennessee Judge did not get government approval to use the devices, and may have jailed people for failing to pay Barnett monitoring fees, which is against the law.

Over the past week Circuit Court Judges Dan Ballou and Paul Winchester have followed suit, suspending the use of the monitoring program for the time being, Barnett said.

When reached for comment on the situation, Barnett could not provide much insight, citing pending legal actions, but did adamantly deny the allegations and affirmed there was no improper activity between his business and Judge Cotton.

Barnett also questioned some of the facts used in the article concerning his business, noting inaccuracies in some details, such as the number of counties D-Trax serves.

Despite the shutdown of operation in Scott and McCreary counties, Barnett also confirmed that business is operating as usual in the eight other counties he serves.

The shut-down, however temporary, not only affects Barnett’s business, it could also have a financial impact on the County as well.

McCreary County Judge Executive Doug Stephens noted the move has the potential to cost the County when it comes to inmate costs.

When a prisoner was allowed to be put on the ankle monitoring system, and would be unable to pay the daily cost, the County picked up the cost of the bill at a discounted rate of about $10 per day. Prisoners who can afford the service are charged a hook-up fee and a daily rate.

That daily cost is considerably cheaper than incarceration in a jail facility, which typically costs upwards of $30 per day.

Without the monitoring program in place, those individuals who would typically be allowed home incarceration now have to be housed at another facility.

An average of about 10 inmates per month were on the program, and could conceivably cost the County more than $6,000 per month in additional housing costs.

Judge Stephens noted the County requested bids on the home monitoring bids previously, and D-Trax was the only company that submitted a proposal.

He also added he had not heard of any accusations against Barnett or his company connected to any McCreary County cases.