Brandon Troxell did most of the hard work on the ground, while Hunter Jones and Devon Hamilton shined in the passing game as the Raiders clinched their third victory in a row with a 59-36 win over Pineville Friday night. 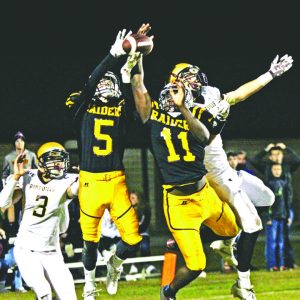 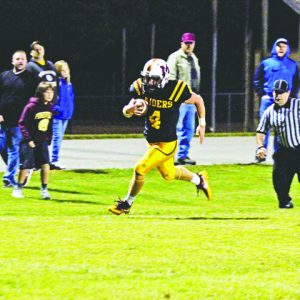 Photos by Chris Hollis Brandon Troxell and Devon Hamilton scored a trio of touchdowns each in the Raiders’ big win over Pineville Friday night, 59-36. 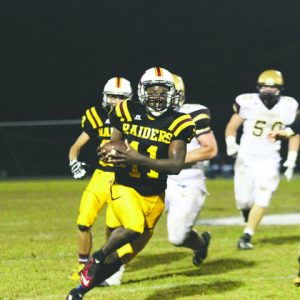 Photos by Chris Hollis Brandon Troxell and Devon Hamilton scored a trio of touchdowns each in the Raiders’ big win over Pineville Friday night, 59-36.

Troxell scored 3 rushing touchdowns while gaining 266-yards on 27 carries to lead the Raiders out of an early deficit and a strong second half surge to end a six-game losing streak against the Mountain Lions dating back to 2010.

Quarterback Hunter Jones completed 15 of 20 attempts for 228 yards and 3 touchdowns – all to Hamilton who caught 7 passes total for 124 yards in the win.

The Raiders needed all 649-yards of total offense as Pineville had a good night in the passing game. Mountain Lion Quarterback Tucker Woolum threw for 336-yards and 3 touchdowns in the 490-yard total offense from Pineville.

Pineville took an early 8-0 lead on a 25-yard pass completion near the end of the first quarter, but the Raiders wasted no time in answering the score.

Jones connected with Hamilton on a 27-yard touchdown pass and catch to tie the game 8-8.

Pineville stalled on their next drive and the Raiders took advantage, driving up the field before Hunter Jones ran a sneak play up the middle for a 1-yard touchdown and a 14-8 lead with 38 seconds left in the half.

The Lions tried a Hail Mary play before time expired where the ball was batted around in the endzone before the Raiders managed to swat it out of bounds, ending the half.

McCreary came out fired up to start the third quarter, with Troxell taking the first snap down the sideline for a 66-yard scoring run that put the Raiders ahead 22-8, and putting a crucial 2-score lead on the visiting team.

Pineville answered the Raiders’ score with one of their own on the next series, a 4-play, 70-yard drive, aided by a Raider penalty to close back to within 8-points.

But McCreary responded in kind the next time they took possession, taking the ball 57-yards on the opening series for another score – a 16-yard pass from Jones to Hamilton.

A Pineville fumble, recovered by Caleb Cox near mid-field set up the next score for McCreary. On the drive the Raiders executed a fake punt, with a nice 50-yard run from Hamilton to keep the drive alive and bringing the ball inside the red-zone. Troxell’s 6-yard touchdown run gave his team a 38-16 lead.

The Raider defense made another stop on the next series, setting up another scoring drive.

Jones found Hamilton in the end-zone on a 11-yard pass that put the game away for good, a 46-16 advantage.

Pineville would score on their next three drives as the game wound down, but the Raiders kept pace, scoring twice more as well.

Nathan Prosser took a direct snap 44-yards for a score on the first TD, and Troxell capped off his night with a 49-yard run for the second.

This week the Raiders hope to keep the win streak alive and guarantee a winning season when they host the Fort Knox Eagles at 7:30 at Norm Parson’s Field.

The Eagles enter the game 0-6, and have only averaged less than 6 points per game on offense, while allowing more than 45 per game on defense.

Last year the Eagles held off the Raiders with a 74-44 win at Fort Knox.