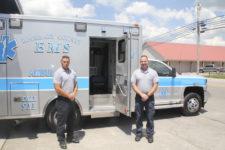 Photo by Greg Bird
Jimmy Barnett and Willie Duncan pose in front of the ambulance used for non-emergency transports.

There is a lot of pressure on the McCreary County Ambulance Service to provide additional revenue for the County budget through providing non-emergency transfers. Over the past two months it appears the service is producing at a rate that may hit the budgeted target.

To balance the budget for the 2016-17 fiscal year, Judge Executive Doug Stephens met with EMS/911 Director Jimmy Barnett and discussed how much additional revenue performing non-emergency transfers could bring in.

When the budget was presented to the Fiscal Court for approval, a staggering $350,000 was estimated from transfers – helping balance the budget.

In August the Ambulance Service took possession of the new truck, and since then business has been booming.

Barnett said more than $48,000 was collected over the first two months of operation, which is exceeding his initial expectations.

“It is actually doing better than I said it could when I asked the Magistrates for permission to add the service,” Barnett said Wednesday.

While the two-month total only projects to about $300,000 in annual revenue, Barnett said some additional revenue for those months could be coming in due to the timing of payouts through Medicare and Medicaid.

Another positive about the total collections is Barnett has already deducted the salaries of crews and fuel from the total, giving a more accurate representation of actual revenue.

When Barnett first approached the Fiscal Court for permission to pursue adding the service in February, he informed the Magistrates that his office was getting constant calls from area hospitals and other ambulance services if they had crews available to take transfers.

Barnett realized this could be a way to generate more money for the County, and help with the financial struggles the government is facing.

To that end he asked the Fiscal Court for permission to finance an additional ambulance that would be dedicated solely to non-emergency transfers, which was approved.

“My real reason behind it was not to benefit the ambulance service, but all County employees,” Barnett said. “I felt that if we could generate more money for the General Fund, the County would be able to give raises to all employees.”

Through the first two months where the dedicated ambulance was available to provide the transfer service, Barnett stated calls requesting use of the truck has only increased, which is a positive.

“I try to schedule two transfers a day,” Barnett said. “One in the morning and one in the afternoon. But, we are getting more calls from Somerset and Corbin, asking if we can help with transfers when their ambulances are in use, and we are glad to take those runs for them.”

Barnett stated sometimes a patient at Lake Cumberland Regional Hospital is being released at the same time a regular crew is making a run to the medical center, so they are able to take the transfer on the return trip. Doing so only increases the effectiveness as the Ambulance Service is able to generate revenue on both ends of a run.

“We have seen five or six transfer runs in a day,” Barnett said

While it remains to be seen if the non-emergency transfers can do what Judge Stephens promised in the budget, but, so far, it seems as if it has a chance to succeed.