Troxell rushes for 310 in Raider win over Fort Knox 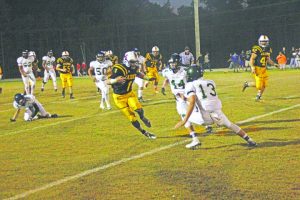 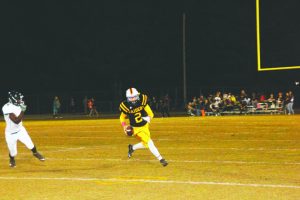 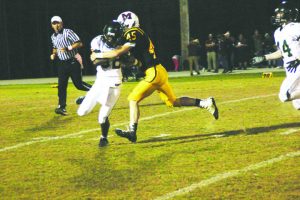 Brandon Troxell rushed for 310 yard on the ground, scoring five touchdowns, while Hunter Jones threw for 2 while passing for 189 yards in the dominating win – avenging last year’s 74-44 loss to the Eagles.The “Raider Revenge” Tour rolls on as McCreary Central Raider Football team earned their 6th win of the season with an impressive 47-8 blow out over the Fort Knox Eagles Friday night.

Playing an identical schedule as last year, where the Raiders finished with a 2-8 record, the 2016 season has shown a marked improvement, tripling their win total against the same opponents who befuddled them last season.

All of their victories this year have been by at least a 20-point margin, and one of their losses (Lynn Camp) could have just as easily been a win if not for some misfortune.

The offense has been one of the main reasons for the Raiders’ success under Coach Lucas Ford this season.

McCreary has scored 365 points already this season, a 45.6 point per game average, compared to their 23.2 point average last season.

The main weapon in the Raiders arsenal is running back Brandon Troxell. The Junior ended the week as the state’s leading rusher with 1,389 total years, 174 per game, with 16 touchdowns. Last year, as a Sophomore, Troxell averaged only 82-yards per game and scored 11 times.

The McCreary air attack is also working very well, with Hunter Jones completing nearly 56 percent of his passes, averaging 119 per game and throwing for 14 touchdowns. Last year Jones finished the season with a completion percentage of only 37 and 3 touchdowns.

Jones’ favorite targets are Devon Hamilton and Nathan Goins who have combined for 595 of Jones’ total 954 yards in the air.

Defensively the Raiders are strong as well, holding opponents to less than 25 points per game, and allowing fewer than 55-yards per game in passing.

The Raider offense got off to a slow start Friday night, but the defense kept the Eagles in check all night, allowing time for the O to warm up.

On the opening drive Caleb Cox broke up a Fort Knox pass on fourth down to give the Raiders possession at their own 47, but a Troxell fumble on the first snap gave the ball back to the Eagles near mid-field.

The D came up big again, forcing a turnover on downs, but the Raiders couldn’t capitalize, punting the ball away after a sack pinned them deep in their own territory.

After another Fort Knox punt, the Raiders finally got on the board at the end of the first quarter on a 7-yard touchdown run from Troxell for a 6-0 lead. The 5-play scoring drive was set up by two big pass completions – a 21-yard strike to Henderson and a 42-yard catch and run from Nathan Prosser.

Cox set up the next score for McCreary, intercepting an Eagle pass on their first play from scrimmage after the Raider touchdown, giving the offense the ball back with 3.1 seconds left in the first quarter.

Jones connected with Hamilton on the first snap, and the Senior tore off down the field for a 57-yard touchdown and a 13-0 lead.

Midway through the second quarter the Raiders padded their lead on an 81-yard run from Troxell. The Raiders lined up with three receivers on the outside, forcing Fort Knox to changer their coverage. The deception worked as Troxell took the ball up the middle, shaking off would-be tacklers for the score and a 20-0 lead.

The Eagles got on the board for the first and only time of the night during the next series, a 4-play, 70-yard drive to make the score 20-8.

McCreary responded with a sustained drive of their own, culminating in an 8-yard touchdown pass to Drew Bell and a 27-8 advantage going in to the half.

The second half belonged to the Raiders as they blanked Fort Knox from the start.

A 58-yard Troxell run on the first play set up another touchdown as Troxell took the next snap at the 14-yard line and shook off tackles on his way to the goal line and a 33-8 lead.

The Eagle’s next drive was cut short after a fumble, which also halted play for a short while as an injured Fort Knox player was transported off the field by an ambulance – the first of two such injuries suffered by Fort Knox in the game.

After a Raider punt on the next drive, Ryan Strunk intercepted an Eagle pass, returning it to the Raiders’ 25.

Troxell came through again, taking four direct snaps in a row to lead McCreary downfield for another score, the final run a 54-yard gallop to the endzone just before the end of the third quarter.

McCreary stopped the Eagles on their next drive, and triggered the running clock with Troxell’s fifth touchdown of the night on a 4-yard run with 6 minutes left in the game.

Fort Knox allowed the clock to run out to finish the game.

The Raiders are off this week, but will return to action next week when they travel to Ewing, Virginia to take on the Thomas Walker Pioneers. The Pioneers enter this week with a 2-4 record and are scoring an average of just under 10 points per game.

Last year the Pioneers knocked off the Raiders with a 38-18 win.

The Raiders wrap up their season on October 28 when they host Harlan.