Oscar Hamilton was honored by Chamber of Commerce for lifetime achievement, just before his passing on Monday 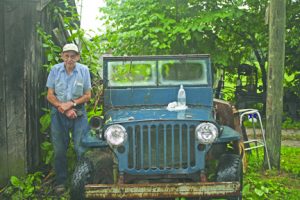 In 2012, I sat down as a reporter and chatted with Oscar Hamilton about his life and legacy.  It was a special interview, and Oscar was one of those rare people I’ll remember for a lifetime.

Sadly, four years later, I’ve learned that Oscar, at the age of ninety-four, has passed-leaving an unfillable void in McCreary County.   I remember our lengthy conversation on that summer day four years ago and how he quipped, “I am what I am!”  It was ‘being what he was’ that led the self-educated Hamilton, just two days before his passing, to be honored as the 2016 recipient of the McCreary County Chamber of Commerce’s Morris and Catherine Strunk Lifetime Achievement Award.  The honor was bestowed upon Hamilton in recognition of ‘’his many years of commitment and concern for his community and for being a mentor to many by sharing his skill and offering words of encouragement and good advice.”  In honoring Hamilton’s legacy, the Chamber declared the recognition as a positive influence to those recognizing his character.  Due to his health, Hamilton received the award at his home in Sawyer on Saturday, October 8, 2016 from past Chamber President Diana Bybee, Board Member David Duncan, and Daniel Ridner who nominated Hamilton for the award. 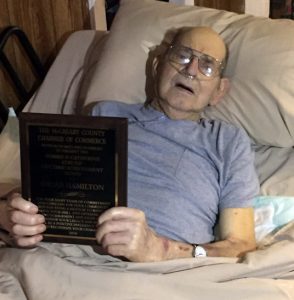 One of eight children of Joe Hamilton and Elsie Morgan Hamilton, Oscar was born on August 16, 1922 in Sawyer.  At the age of four, Oscar and his family settled on a nearby farm where Oscar lived until his passing.  I remember how in our earlier interview, Oscar described himself as being born in an old log house on a hot day with no refrigerator.  As the oldest child, Oscar helped raise his seven younger siblings.

Hamilton worked in the timber woods, cutting timber to send to Flat Rock for shipment to the shipyards.  His civilian contribution to the country during wartime was considered essential.  He continued to work in timber until 1949 when he went on to other types of work including driving a coal truck.  He worked for seventeen years blacktopping roads with a company out of Bowling Green until a dozer turned over and hit him, leaving Oscar temporarily crippled with a broken hip and leg.   He was laid up for thirty days in a Lexington hospital and off work for a year.

Later in life, Oscar became known for his work on the trains at Tombstone Junction.  Learning from those who were brought in from away to work on the trains, Oscar quickly become known as a mechanical genius.  He gained the reputation of being the man who could work on things and fix them.

“The Lord gave me knowledge, and I cultivated it,” Oscar told me.  “When I cultivated it, He gave me more knowledge.  My dad could make things work, and my mom had a real knack for quilting and making things around the house.  I think it was a gift to me.”

The God-given gift Oscar shared with his ancestors was an uncanny blend of mechanical skill and creative genius.  Oscar, with his sharp aptitude for making things work, always amazed people as he sawed, welded, and jerry-rigged new parts out of old ones never hesitating to add an additional bolt or two if he felt the need.

At one point, working for a coal company, Oscar became so good at building D-9 and V-12 engines that the company wanted him to relocate to Florida to work. Oscar declined knowing he could not leave his wife and father behind.

In addition to Oscar Hamilton’s remarkable talent and his life of hard work, he always reached out to his fellow man.  He wanted to make things better for his neighbors and his community.   Hamilton served on the Eagle Sawyer Fire Department beginning on day one and also served as its Commissioner.  He served on the Soil Conservation District for more than twenty years.  Throughout his life, he received many plaques and certificates expressing gratitude for devoted service to his community.  Among those honors were expressions of appreciation from former Judge Executive Greene, the Eagle Sawyer Fire Department, the Sawyer Christian Academy, and the Soil Conservation District.

Faith and family were important to Hamilton who was a member of the Mill Creek Church. During his life, he served as a trustee for the Church and volunteered on the cemetery board.  Married to Beatrice Taylor Hamilton for thirty-eight years before she passed, the couple had four children.  Oscar was clearly proud of his family as evidenced by the simple plaque I remember hanging on his living room wall amongst the numerous ones honoring him for his community service.  That simple plaque was probably the most special of all because it was engraved with the words, “World’s Greatest Grandpa.”

Before I left Oscar’s place on that beautiful day in 2012, I remember the way we loaded up in his small car and drove around a fraction of his property.    As he drove by his huge garden, Oscar pointed to barns filled with freshly cut hay.  He was obviously both humble and content.   With Skippy the dog and his loyal cats following closely behind, Oscar eased his car down a grassy path leading into a field of waist high Johnson grass.  Driving into the waves of grass, Oscar suddenly braked to enjoy the view.

“I cleared this field with my mom and brother when I was young,” he recalled as he gazed across the field to the surrounding hills.  He smiled as a goldfinch bobbed through the air, and a wild turkey scurried through the grass.

“The Lord has blessed me and has been good to me,” Oscar reflected as we sat quietly enjoying the beauty of nature.  “None of this stuff is mine.  It’s the Lord’s.  He’s just letting me use it.  I didn’t bring anything with me when I came, and I won’t take anything with me when I go.  The Lord gave me knowledge, and I cultivated it.  I hope it shows.”