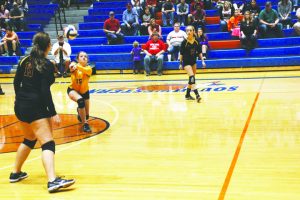 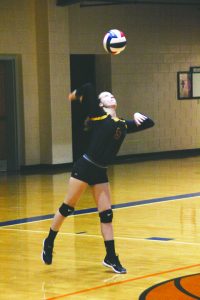 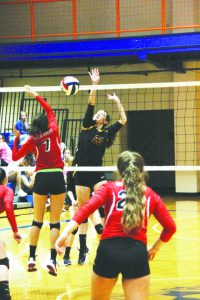 Photos by Greg Bird Caitlyn Strunk (middle) goes up for a block. 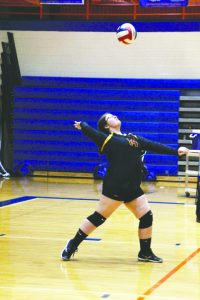 Photo by Greg Bird )Sky Clark plays a ball in the middle of the court. 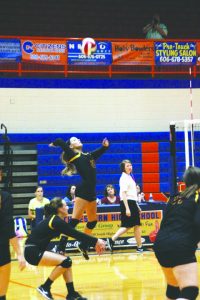 Photos by Greg Bird Aryn Stephens and Stacey Vanover were both named to the 48th District All Tournament Team following the Lady Raiders’ District Tournament. 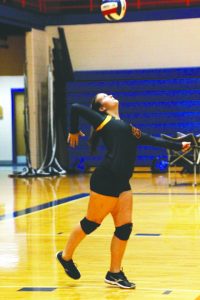 Photos by Greg Bird Aryn Stephens and Stacey Vanover were both named to the 48th District All Tournament Team following the Lady Raiders’ District Tournament.

The Lady Raiders season ended Monday night after a 3-0 loss to the Wayne County Lady Cardinals in the 48th District Tournament, held at Southwestern High School.

Wayne County would take the first game of the match 25-16, but the Lady Raiders started well, jumping to an early lead before the Cardinals finally pulled ahead and closed the game on a 5-0 run.

The second set saw a similar trend – McCreary staying close in the early going, but Wayne County closing out strong and going ahead in the best of three match with a 25-8 victory.

In the third game the Lady Raiders rallied and really gave the Cardinals everything they could handle, but Wayne prevailed with a 25-22 win, setting up a meeting with Southwestern in the Championship game.

Despite the loss Coach Wade Davis was happy with the performance he saw on the court.

“I am very proud of them,” Davis said. “We competed well, especially in the last game.”

Davis said the off-season will be crucial for McCreary as the freshmen and sophomores on the roster continue to grow and develop.

“We just didn’t have the size to compete this year,” he said. “We were undersized compared to most of the teams we faced. But we have a lot of underclassmen on the roster that gained valuable experience this season and if they could add a couple inches of height before next year we could be right in the thick of it.”

The Lady Raiders ended the season with a record of 11-24.