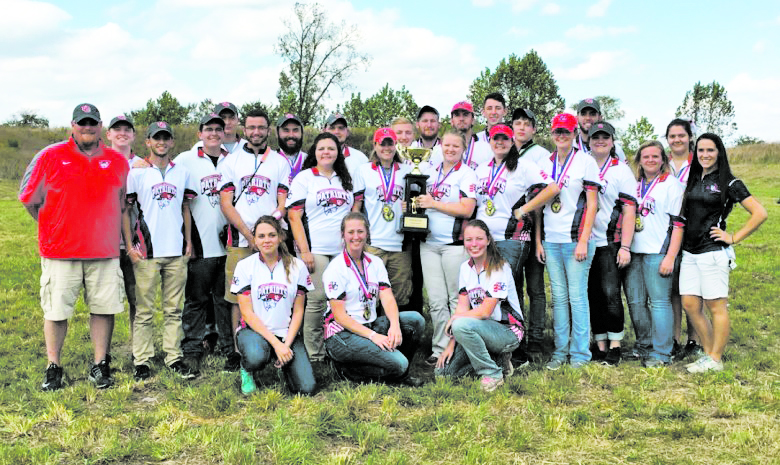 WILLIAMSBURG, KY (10/18/2016)– UC Archery hit the road this past weekend looking to capture their second straight USIAC 3D National Championship in Carrier Mills, Illinois. With 18 teams competing this past weekend, the Pats knew it would be a tough road to another title, but with some phenomenal performances combined with the consistent shooting efforts, UC came away with the USIAC 3D National Championship.

Beginning with individual Men’s Bowhunter, Jayson Byrd (SR/Atmore, AL) would find his way onto the podium with a second place finish with a score of 404 with 11 12’s. Teammate Caleb Dixon (FR/Pine Knot, KY) finished fourth with 397 points and nine 12’s while Daniel Chitwood (SO/Mt. Washington, KY) finished fifth with 395 total points and seven 12’s. In individual Women’s Bowhunter, UC’s Haley Haygood (SR/Liberty, MS) finished on the podium in third place with a score of 353 with five 12’s. Courtnie Carr (SO/Waddy, KY) finished fourth just one point back with 352 total points and two 12’s.

In the individual Men’s Compound division, Josh Isenhoff (FR/Gracey, KY) would win the National Championship with a total score of 434, including 22 12s with a 216 in his first round and 218 in his second round. Teammate Clint Moore (SO/Williamstown, KY) finished runner-up with a score of 427 with 16 12’s. John Whalen (JR/Booneville, IN) earned a fourth place finish, just off the podium, with a combined score of 418 with 14 12’s. For the women in the Compound division, Kayla Dowell (SO/Brandenburg, KY) earned her way onto the podium with a second place finish with 394 total points including nine 12’s. Teammate Madeline Brown (SR/Williamsburg, KY) finished fourth in the division, tying third place with 388 total points but had nine 12’s compared to third’s ten 12’s. Kristen Swords (SR/Pontotoc, MS) also earned a top five finish with a score of 383, good for fifth place.

Lakin Crum (SR/Catlettsburg, KY) would earn the National Championship in the individual Women’s Recurve division with a score of 338 including four 12’s. Teammate Hannah Blevins (SR/Somerset, KY) finished in fourth place in the division with 287 total points and one 12.

In team competition, the Men’s Bowhunter team consisting of Jayson Byrd, Aaron Cook (SR/Stanford, KY), and Caleb Dixon won gold going 3-0 in tournament play, including wins over Hocking College 136-135, Southeastern Illinois 180-163, and Mississippi College 164-131. The Women’s Bowhunter team of Courtnie Carr, McKenzie Gaines (SO/London, KY), and Ellie Yocum (SR/Frankfort, KY) earned the bronze medal by going 2-1 with a win over Liberty University 167-145, a loss in the semifinals to Southeastern Illinois 174-168, and a victory over Union College in the bronze medal match 153-131.

Continuing in team competition, the Men’s Compound team of Josh Isenhoff, Clint Moore, and John Whalen earned silver going 2-1 with a win over Liberty 198-142, a victory over Southeastern Illinois 192-182, but falling to Madisonville CC in the gold medal match 184-176. In the Women’s Compound team tournament, the squad of Madeline Brown, Kayla Dowell, and Kristen Swords defeated Midway University 174-117 to earn gold in the division. Also in the Mixed Compound division, the team of Madeline Brown and Josh Isenhoff for UC earned silver in the division as the fell in the gold medal match to Union College 132-115.

Head Coach Kris Strebeck commented, “I am so proud of this team and the accomplishments they have achieved. This was a complete team effort as we successfully defended our 3D National Championship from last season. We came in with a good mindset and took care of business in a field of a lot of successful archers. This was the largest 3D National Tournament for colleges and universities, so for us to come away with another championship is a huge deal for our program. We are ecstatic with our performance, but now it’s time to begin preparing for the spring season.”