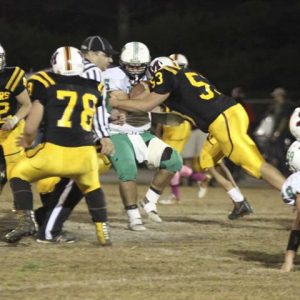 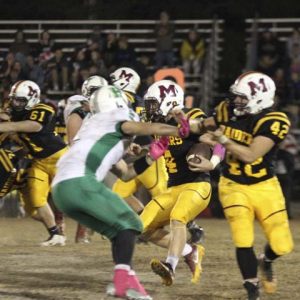 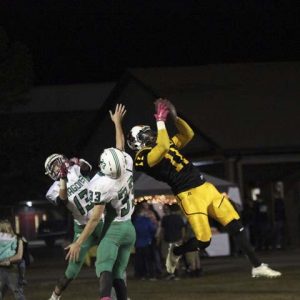 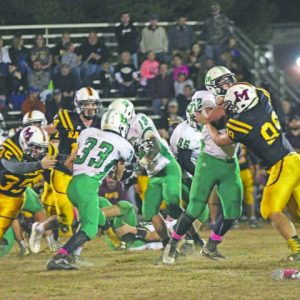 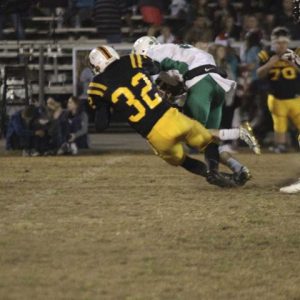 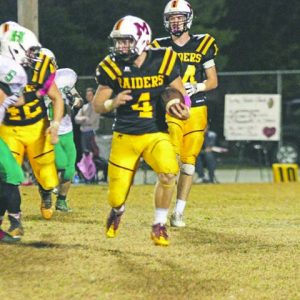 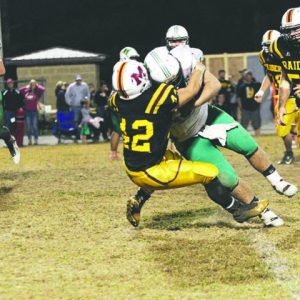 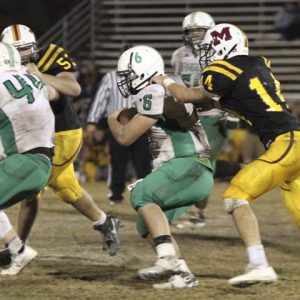 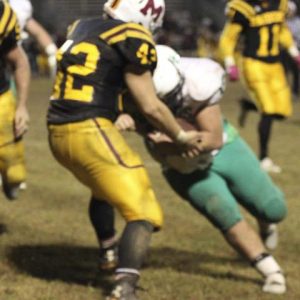 The final game of the season was one of the biggest tests for the Raiders this season.

Taking on the Green Dragons of Harlan, who entered the game with a 6-3 record, McCreary was looking to earn their school-best 8th win as they closed out the 2016 season at home.

The first half was a close battle, with the Raiders owning a lead going in to the third quarter, but penalties ultimately cost McCreary as the Raiders were flagged 13 times for a total of 115 yards.

Offensively the Raiders did well, totaling 323 yards in total, but the Dragons were just a little better – totaling 362 yards on the night.

The state’s leading rusher, Brandon Troxell, still had a strong night, finishing with 138 yards on the ground, but was held below his average of 219 a game.

Hunter Jones completed 6 of 9 passes for 90 yards and 2 touchdowns, while Ryan Jones threw for one as well, going 1 for 1 for 55 yards.

Devon Hamilton caught 2 passes for 61 yards and a pair of touchdowns, Hunter Jones caught 1 for 55 yards and a score as well.

The first half was exciting as the teams traded scores several times.

Harlan scored first, recovering an onside kick to open the game then embarking on a 12-play drive, culminating with a 7-yard touchdown run to take an 8-0 lead.

The Raiders wasted little time responding, answering the score with a touchdown of their own – thanks to a 22-yard run from Devon Hamilton to tie the game with 3:26 left in the first quarter.

The Green Dragons answered with their second score on the next possession, a 14-play drive ending in a 2-yard touchdown run.

The Raiders came right back and tied the game for the second time on the following possession off a 11-yard pass from Hunter Jones to Hamilton with 5:27 left in the first half.

McCreary stopped Harlan on the next drive and took over on their own 35-yard line following a Green Dragon punt. A 47-yard touchdown pass to Hamilton gave the Raiders a 21-15 lead with 1:44 left in the first half.

The Dragon’s next drive was cut short when Caleb Cox intercepted a pass near mid-field and the teams went in to the break with McCreary holding a 6-point lead.

Harlan regained the lead on their opening possession of the second half, scoring on a 10-play drive to take a 22-21 lead.

The Raiders’ next drive stalled near mid-field, forcing them to punt, setting up Harlan’s fourth score of the night, on a 6-yard run on the 6-play drive for a 29-21 advantage.

The Dragons recovered an onside kick following the score, but the Raider defense was able to stop a Harlan drive and the Raiders took over on their own 1-yard line.

Five plays later the Raiders managed to advance only to their 11, when a fumble gave the Dragons the ball back at McCreary’s 18.

An unsportsmanlike conduct against the Raiders on the next play put the ball at the 6, where Harlan would score on a 6-yard run for a 35-21 lead.

Down 2 scores with less than four minutes to play, the Raiders needed to score quick, and that is what they did.

Ryan Jones took the snap on the first play, and threw a 55-yard touchdown to Hunter Jones. A two-point conversion failed putting McCreary down 9, 36-27 with 3:07 left on the clock.

Harlan protected the ball over the final three minutes, but the frustration must have gotten to McCreary as two penalties were called in the last seconds before time expired.