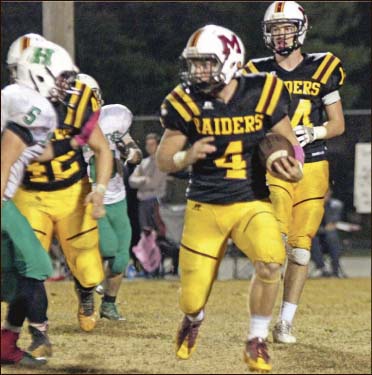 Photo by Chirs Hollis
Brandon Troxell not only set school records for total rushing yards in a game and a season, he also led the state in rushing during the regular season.

It certainly has been an incredible year for the Raider Football Team.

Amassing a school-best winning percentage (.700) and tying the team record for wins (7), the Raiders certainly have changed direction for the positive.

A lot of hard work, and outstanding performances went in to such a successful season, but one performance may stand above the rest.

The total yards is the most by a McCreary Central rusher since the program began, and his 353 yards gained against Thomas Walker two weeks ago broke the previous single-game total of 335, set by Aaron Watts in 2007.

Troxell’s 25 touchdowns this season also place him 4th in the state in scoring, an impressive feat.

The young man was honored at a recent McCreary County Board meeting, and he spoke briefly about his thoughts on his record-setting season.

“First of all I thank God for giving me the ability, and for surrounding me with great teammates who never let me give up,” Troxell said.

“Coach (Lucas) Ford and his staff have been wonderful, giving me the opportunity to run the ball, and I couldn’t have done it without my team. I couldn’t do any of this without their help.”

Troxell also recognized his previous coach for installing in him the work ethic needed to excel.

“Coach Bozeman worked me and the team to death last year,” he said with a laugh. “That really helped me become a better and stronger player. He deserves a lot of credit too.”

Next year will be Troxell’s final season as a Raider. When asked what he expected from his Senior year, he never hesitated:

“Nothing short of playing for a Regional Championship.”

We would be remiss to note that Troxell wasn’t the only Raider to have an outstanding season. A lot of other factors went in to making this year one of the best seasons the team has ever had.

Defensively the team was led in tackles by Nathan Prosser, who finished the season with 124 total tackles, followed by Ryan Strunk with 102.

Entering the final week the Raiders, as a team, were ranked 7th in the state in overall scoring, 14th in rushing and 20th in passing defense.