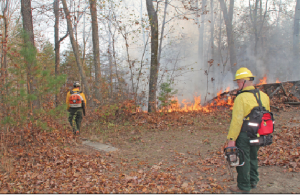 Firefighters work to create a fire break on Davis Hill, one of many brush fires that were reported this week in McCreary County.

Despite burn bans mandated in McCreary County by local government, U. S. Forest Service, and Big South Fork National River and Recreation Area officials, a smoky haze continued to cover much of the area earlier this week as a result of forest fires.  While firefighters with the local fire departments and U.S. Forest Service have dealt with some local fires, much of the smoke drifting through the county seems to have travelled from intense fires raging in other parts of the state and in Tennessee.

According to U. S. Forest Service (USFS) District Ranger Tim Reed (Stearns Ranger District), USFS firefighters have dealt with seven fires since the end of October.  Of the seven fires, three were located off Williamsburg Street and a fourth off of HWY 90 in Kilburn.  Over the weekend, forest fires on Taylor Ridge and Barren Fork were contained.  On Monday, USFS firefighters reacted to a forest fire on Hatfield Road.  According to Reed, all were small (under one acre) with the exception of the Taylor Ridge fire which covered slightly more than one hundred acres.  All of the fires were caused by humans with one of the fires resulting from open debris burning.  The fire at Barren Fork was caused by an escaped campfire.  State and local firefighters were also called to fight fire on private land on Marsh Creek on Monday.

Reed said the majority of drift smoke encompassing the county currently is coming from fires outside of the county.   Unfortunately, he does not expect conditions to improve in the immediate future.

“It continues to look dry,” Reed remarked.  “There is very little measurable precipitation in the ten day forecast and firefighting resources are being stretched thin.  It will take a significant amount of rain to provide any real relieve.”

Reed cautioned against open burning citing the current open burn ban in place county-wide and in the Daniel Boone National Forest as well as the Big South Fork National River and Recreational Area.  Current restrictions on the use of fire on national forest lands include the prohibition of any open fire outside of developed recreation areas that are part of the national forest.  In campgrounds and picnic areas, campfires are permitted only in existing metal fire rings and pedestal grills installed by the Forest Service.

The restriction order also prohibits the use of candles or any other open –flame device outside of developed recreation sites.  Regulations require that any campfire be attended at all times, even those in developed recreation areas where fire rings occur.  Violators of the restrictions are subject to fines, federal court appearances, and possible liability for fire suppression costs.

“Everyone needs to be extremely cautious with fire or any source of possible ignition, we are seeing conditions where the smallest spark could cause a serious situation” Reed emphasized.

Local fire crews were active this past week as well with more than six brush fires reported and firefighters from all five fire districts were in action battling blazes on Marsh Creek, Davis Hill, Lick Creek and other areas.

Due to the dry conditions remaining and the risk of fire spreading is still considered high, a burn ban remains in effect in McCreary County.