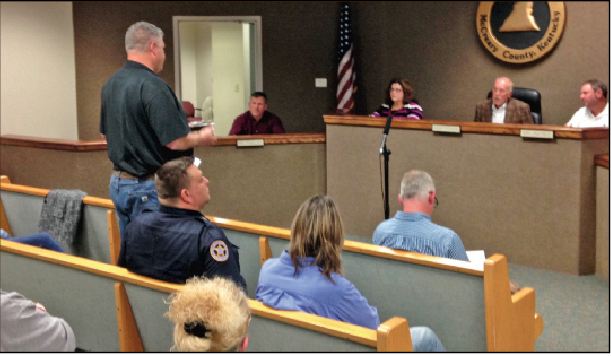 The lack of a jail continues to be a hot topic of discussion at McCreary County Fiscal Court meetings, and an appearance by Leslie County Jailer Danny Clark Thursday night only added more concerns.

Jailer Clark presented his comments during the citizen participation of the meeting to ask for more help in the costs of guarding the prisoners and meeting his payroll obligations.

Clark began by noting his jail is currently operating at 175 percent of capacity, stating he is allowed to do so thanks to a recent positive inspection report from the state.

His facility is housing an average of about 60 McCreary County inmates each month, which he keeps in a separate population.

By law, Clark said, he is required to keep four guards on duty at all times, and when an inmate needs a hospital visit, an additional guard must be put on duty to maintain an active presence near the prisoner.

He noted the contract between McCreary County and his Jail stipulates the County would provide staff to cover such instances.

He understands it would be difficult to arrange a transport officer to be present during a hospital stay, but asked if the County could cover the overtime often incurred by his guards when performing the extra duty. He noted he typically sends his lowest pay-scale employee to the hospital, which is paid about $8.50 per hour.

He noted one female prisoner from the County was pregnant at the time of her arrest and had to spend several days in the hospital.

He also stated when McCreary County inmates are scheduled for a Court appearance his department often has to provide an additional vehicle and two guards. McCreary County has a 15-person van, but often time more than 20 prisoners have to make the trip.

Clark asked for assistance from the County by either reimbursing his department for the additional costs, or by providing additional transport vehicles and guards.

Clark said he understood the financial difficulties McCreary is facing, but said he is under similar funding issues.

“We’re about as broke as you, but we need paid on time,” Clark said. “I can’t go two months without pay.”

Judge Stephens admitted the County was two-weeks late on the last payment, but said that was the only time there was a delay in payment to Leslie County.

He stated that the current housing bill for Leslie County was about $62,000, with about an additional $3,000 due to other facilities.

Stephens said there is enough money in the General Fund to meet the housing bill and other bills once they were approved by the Fiscal Court.

He assured Clark that he would do his best to remit payments in a timely manner, and to keep him informed if there may be a slight delay.

Stephens also agreed that any additional costs for overtime should be submitted to his office for reimbursement.

County Attorney Conley Chaney, who praised Jailer Clark for his willingness to work with the county when dealing with inmates, asked Clark to comment about criticisms about the number of people being arrested for alcohol or drug charges.

“Your inmates arrested for alcohol intoxication or public intoxication are the drunkest and highest people I have ever seen,” Jailer Clark said.

Jailer Jessie Hatfield told the Court that Jailer Clark has gone above and beyond in helping McCreary County, and warned them that if they don’t commit to making timely payments they could find themselves looking for new jail facilities to house local inmates – which would be even farther away then the 90-minute drive to Leslie County.

“If we put him in a bind, you’ll know where we’ll be,” Hatfield said.

The jail came up a second time in the meeting during citizen participation when Chamber President Susie Thompson asked what the Fiscal Court was actively doing to rectify the jail situation.

“It seems like the jail is always the issue,” she said. “What plans do you have to resolve this issue permanently?”

Judge Stephens reiterated that the current operating budget for transport and housing of prisoners is about $800,000 annually, but if the County were to build a new jail that cost would rise to about $1.5 million – and there isn’t enough revenue to cover the increased cost.

“Unless the people want a tax, we don’t have a lot of options to build a new jail,” he said. “Without new income, that isn’t a feasible option.”

County Attorney Chaney asked about the status of the budget concerning jail costs, noting if costs continue to rise, there could be a problem finding revenue to pay bills before the end of the fiscal year.

“The County has to take some action to make sure we meet that budget,” he said.

Deputy Judge/Finance Officer Randy Jones stated that as of last month the County was on budget.

An ad valorem tax is a special tax levied similar to property taxes as established by KRS 65.125, but would have to be voted on by the citizens of the county or city that is looking to enact. According to the statute “the revenues generated shall be in addition to other taxes and used solely for the specified project, program, or service as designated by the ordinance enacting the tax. The proceeds of the tax shall be accounted for in a separate fund and shall not be disbursed, expended, encumbered, or transferred for any use or purpose other than provided by the ordinance enacting the special ad valorem tax.”

Chaney said it may be a possibility for such a tax to be used to fund jail operations and deserves consideration.