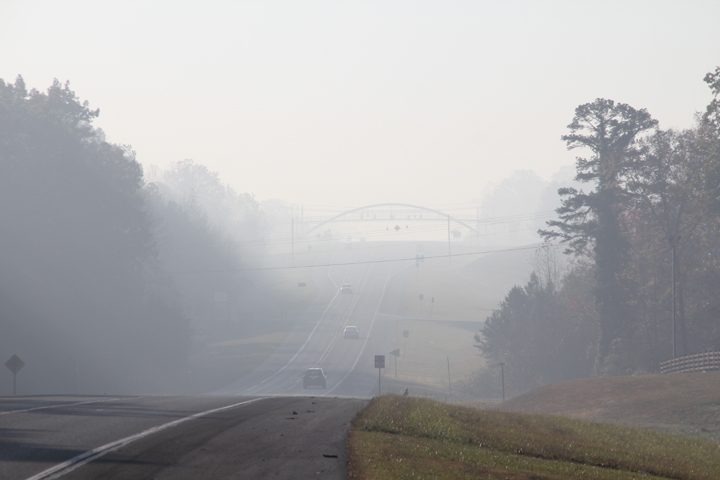 Heavy smoke blanketed McCreary County Monday and Tuesday as wildfires continue to plague the area thanks to dry conditions.

The smoke was particularly heavy in Pine Knot and Strunk as a nearby fire on Sergeant Road combined with cold air being trapped beneath a layer of warmer air kept the smoke close to the ground – making visibility difficult.

Local fire firefighters and crews from the U.S. Forest Service were working to contain the fire, but as dry conditions persist throughout the week, the threat of additional fires is present.

McCreary County is currently under a burn ban, meaning no fires are to be set – for any reason. Several individuals have been cited already for violations of the ban.

The smoke prompted the closure of McCreary County Schools Monday afternoon and Tuesday as breathing conditions in both Pine Knot schools posed a threat to student health.

Superintendent Mike Cash said the closure was in the best interests of students and staff, as the heavy smoke in the air is considered a health risk, especially among individuals suffering from asthma and other bronchial conditions.

The limited visibility also was a concern for bus routes, both in the morning and afternoon routes.

With the closure Tuesday the School District implemented its first Non Traditional Instruction day, meaning students were asked to complete a lesson in their take-home packet. If enough students complete and turn in the assignment, the day will be considered an instructional day, and students will not need to make up the day later in the school year.

Conditions were better Wednesday, but the heavy smell of smoke still lingered in Pine Knot Intermediate School, prompting a second cancelation of classes.