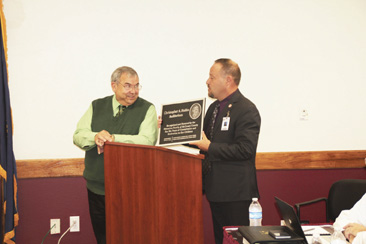 Former McCreary Central Choir and Madrigals Director Chris Hubbs will be immortalized by having the McCreary Central High School Auditorium named in his honor in recognition of the many years of dedicated work and guidance he provided to his students.

The formal announcement of the dedication was made Thursday night during the November meeting of the McCreary County Board of Education.

With Hubbs in attendance, Superintendent Mike Cash unveiled the plaque destined to adorn the auditorium to Hubbs, who began teaching at MCHS in 1978 and led his students to many state and national awards and recognitions.

A reception and ceremony will be held on Sunday, December 4 starting at 2:00 p.m. at the High School.

It was also reported that the first two Non-Traditional Instruction Days appeared to be a success.

The District missed two days of school last week due to heavy smoke from brush fires in the area, prompting the use of the NTI packets for those days.

While the schools are still compiling the final reports, it appears that every school had well over the minimum 85 percent participation required to count those days toward end-of-the-year attendance.

“It was a good, early test for us,” Cash said. “They were intended to be used for snow days, but we were able to see how the system works. The real test will be in the winter when we need staff to be able to come in, but we think this will be a great benefit for the McCreary County School District.”

In other actions Thursday night, the Board accepted the annual audit report from White and Associates, which stated the School District is in a sound financial state.

The Board also approved the final pay application for the softball and baseball fieldhouse projects, and payment for the middle school roof and asphalt projects.

In a special session Tuesday the Board heard the annual reports from all five schools and authorized the purchase of four new busses for the fleet.

The next regular scheduled meeting of the Board of Education will be on Thursday, December 15 at 6:30 p.m.