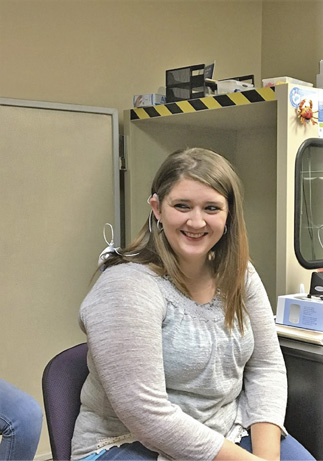 Thirty-two year old Stephanie Meadows and her family have extra reason to be thankful this Thanksgiving.  Thanks to her recent cochlear implants, Stephanie will be able to clearly hear the sounds of Thanksgiving.

Stephanie was a third grader when her teacher noticed her difficulty hearing and recommended her hearing be checked.  Upon being checked, the family learned Stephanie’s mild hearing loss was a result of dead particles in the cochlea effecting both ears.  They also learned the hearing loss would be progressive and that Stephanie would eventually be deaf.

“Ninety percent of the time they don’t know why this happens,” Stephanie explained.  “It’s just unexplainable.”

With hearing aids in both ears as a teenager, Stephanie was sometimes embarrassed to wear them.

“Back then, there weren’t a lot of kids with hearing aids and disabilities,” Stephanie said with a grin.  “I lost my hearing aids a lot!”

Today, Stephanie admits the hearing aids were a big help when she first received them-especially in talking one on one with another person.  Communicating with a group of people remained challenging.

During the last four years, Stephanie’s hearing drastically decreased.  Recently, she lost over half of her hearing in her left ear overnight.  Because of the loss, Stephanie was cleared for the cochlear implants, and on May 26, she underwent her first surgery.

“They did the left ear first,” she shared.  “I wanted to go ahead with both ears, but the doctors recommended against it.  Since I still had some hearing left, they thought it might be too big of a change.”

After surgery, there was a four to six week wait to allow swelling to decrease.  After that, the external processor was activated and then gradually adjusted louder and louder.

The change in Stephanie’s hearing has been remarkable although she still has difficulty with listening to music.  In addition, she struggles with letting go of her long established habit of reading lips.

After activation of the first implant, Stephanie was amazed to actually be hearing the sounds around her.

“I still want to read lips,” she said with a laugh.  “I need to work hard on relying on my hearing.”

For Stephanie, as the mother of three children ages thirteen, nine, and eight, the gift of plainly hearing her children speak has been incredible.  When her hearing deteriorated so much she could no longer hear Allison, her youngest child, Stephanie knew she needed to go for surgery.

“I didn’t want to miss what my children were saying to me,” she explained.

“Hearing my kids say, ‘Hi, Mommy,’ was such a wonderful feeling,” she recalled.  “It broke my heart though when I thought about the many things I had missed by not hearing them sooner.  Before deciding to do the surgery, I realized there are times when you’ve got to let go of small things to let God give you bigger things.  When my hearing got so bad that I could no longer hear Allsion, my youngest, I knew I needed to go have the surgery.” 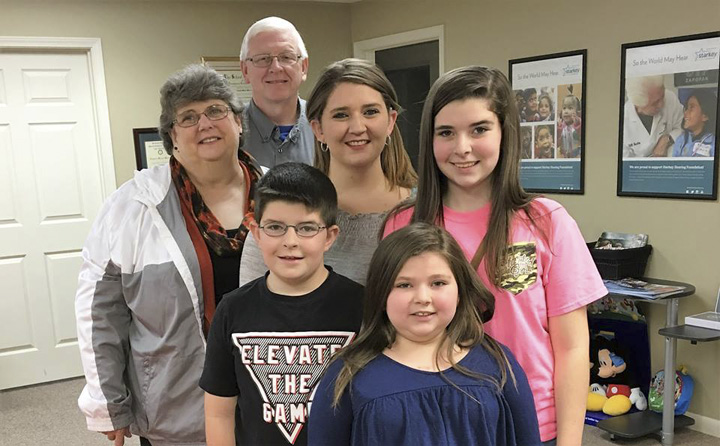 Photos by Eugenia Jones
Stehanie’s chldren and parents joined her for the final activation of her implants. Front to back: (Children) Allison Meadows, Emmanuel Meadows, Brooklyn Meadows, Stephanie Meadows, (parents) Debbie and Lonnie Poynter. Stephanie’s husband Tim has also been a major support during the process.

“Tim has been a big support,” Stephanie commented.  “I think he gets as excited about me hearing things as I do!  ”

Now, when Stephanie hears a new sound, she constantly asks, “What is it?”  Although, at times, she has sensory overload as so many unaccustomed sounds bombard her at once, it is empowering as a new world has opened up to her.

Plainly hearing laughter, children playing, and the sound of her dog’s toenails clicking on the floor as they walk through the house, Stephanie is in awe.   She flashed a huge smile as she described the crunch of fall leaves underfoot as she and her family enjoyed a recent hike as being “loud, annoying, but wonderful!”

“So many people take these things for granted and don’t realize,” she observed.  “There are so many things I would miss without the surgery.  I’m thankful.  I’m happy.  And, yes, I’d do it all over again!”