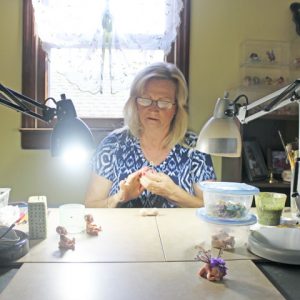 Photo by Eugenia Jones As a self-taught sculptor of miniature fantasy babies, Gail Wilson of Stearns has a true passion for creating her tiny works of art.. During the coming weeks, The Voice will spotlight a few of the many talented artisans in McCreary County. 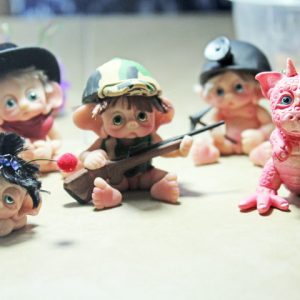 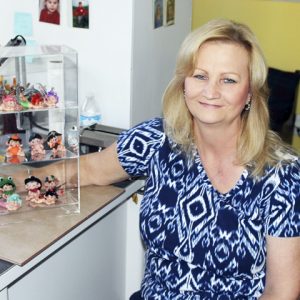 Photo by Eugenia Jones Gail credits God for her talent and enjoys spreading happiness to others with her miniature creations. Her Fantasy Babies have found homes across the United States and around the world. The fantasy babies are personalized to the liking of individual customers.

Thanks to Gail Wilson of Stearns, fantasies from McCreary County are scattered across the United States and around the world.

“I like fantasy,” Gail remarked.  “That’s more my personality.  I’m not so serious!”

After discovering polymer clay, Gail began experimenting with sculpting her very own fantasy babies-miniature dolls with unique personalities.  Self-taught and choosing not to use molds, Gail “played” with the clay until she discovered the amount of clay needed to make the head, body, and legs for each doll.  With time and experimentation, Gail mastered her very own technique for making fantastic fantasy babies.

“In the beginning, it took a lot of patience,” Gail said.  “But now, after making so many, it’s almost like I have a recipe.”

Already familiar with selling items through ebay, Gail was soon using that venue to sell her creations worldwide.  It wasn’t long before Gail’s fantasy babies found homes across the United States and around the world in Germany, England, Australia, Canada, Mexico, Spain, France, and Italy.

Last year, Gail made the decision to step away from ebay and focus more on selling her fantasy babies locally through Facebook.   She is enjoying the opportunity to work more directly with those wishing to purchase one of her babies.  She is also enjoying the local success of her creations.

“I don’t keep a lot of my miniatures in stock because I sell every single one I make,” Gail remarked.

Although all of the dolls have the same “look” in the face, each can be individualized for clothing, hair color, and eye color.  The fantasy babies may also be individualized to reflect hobbies and interests.  Those wishing to purchase one of Gail’s fantasy babies can choose from an almost unlimited variety.  Popular miniatures include fairies, mermaids, dragons, ladybugs, and those reflecting holidays, birthdays, and specific hobbies.  Gail even created a coal miner fantasy baby and a group of Wizard of Oz babies.

Gail emphasized her skill in making the fantasy babies is a gift from God.

“I don’t take credit,” she remarked.  “This is God given talent.  So many nice things have happened through the babies in the U.S. and around the world.  I’ve received such touching messages from people.  To some, these little fantasy babies are more than collectibles.  It’s almost like they take a life of their own.  It’s bigger than me.”

As proof of the effect the fantasy babies can have on those who purchase them, Gail shared some touching correspondence from a lady in Michigan who wrote about the passing of her sister who had been an enthusiastic collector of fairies and had purchased fairy fantasy babies from Gail.  In writing Gail, the sister shared the following:

“My sister’s life was not an easy one.  Between poor health, even as a child, and abusive husbands, her luck was less than stellar.  I was reading in her journal and one entry in particular captured my heart.  She wrote that her husband would never understand her love of fairies.  What he didn’t understand was that they carried her back to her childhood-a time, according to my sister, of simplicity and innocence.  I only have a small sampling of her collection.  I was hoping to get a price for a missing baby boy to see if I could fit it in my budget in honor of my sister.  I want to thank you for filling my sister’s life with simplicity, innocence, and happiness.”

Gail, obviously touched by the correspondence, made the missing fantasy baby and sent it to the lady at no cost.

In addition to giving others a boost, Gail says her babies give her a sense of self.

“Making them is like therapy for me,” she commented.  “The babies are a part of me.  I love making them.”

On average it takes a total of about 3 ½ hours for Gail to complete one of her babies.  She refuses to be paid up front.  Instead, before accepting pay, she sends a photo of the completed baby to the individual buyer to make sure they are satisfied. If the customer is not satisfied, Gail remakes the doll until customer satisfaction is reached.  Most of her collectible fantasy babies are currently priced for twenty-five dollars each.  If interested in learning more about the miniature fantasy babies, visit “Gail’s Fantasy Babies” on Facebook.