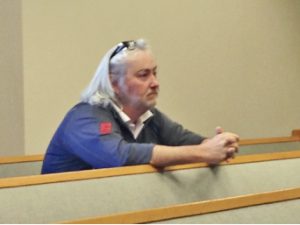 “You had rates better than most of the state and you threw it away. The past five years have killed us.”
Carl Towns – Scott Solid Waste

McCreary County’s leaders are nowhere near any closer to resolving the garbage issue with less than a month before the County’s contract with Scott Solid Waste expires.

One thing is clear – come 2017, McCreary County residents can possibly expect to pay a little more for their garbage service, rather than less as the Fiscal Court originally wanted.

The contract between Scott Solid Waste and McCreary County will expire on December 31. The Fiscal Court has less than four weeks to find a garbage service provider, negotiate a new deal with SSW, or face an emergency situation wherein the County would have to find some way to provide service to the public – as required by statute.

Friday morning the Fiscal Court met in special session mainly with the intended purpose of conducting a second reading of a new garbage ordinance and opening bid proposals to provide service.

Before discussion of the new ordinance began, County Attorney Conley Chaney noted the ordinance would not go in to effect until January 1, 2017, and the original ordinance – passed five years ago, would still be in effect until that date.

He also stated, the way the new ordinance was written, if no proposals met the pricing included in the language of the law, the Court could not accept the proposal or else run the risk of the provider failing to follow the law.

Scott Solid Waste’s Carl Towns quickly put to rest any question that his proposal – the only one received – did not meet the pricing requested by the ordinance.

Towns continued to question why the County wanted to dictate the pricing in the ordinance, noting that he provides services in 35 Kentucky counties, and McCreary is the only one that includes pricing in the law. Other counties, he stated, allow for negotiations between the government and provider or request their pricing as part of the bid process.

Judge Executive Doug Stephens admitted the Fiscal Court would have to re-examine how they wished to proceed, but noted it was unlikely that a new ordinance could be drafted, enacted and the service bid out in enough time to beat the current deadline of December 31.

By law the Fiscal Court would have to conduct a first reading of a new ordinance, advertise both the second reading and request for bids for at least one week, then allow time for a review of any bids before any new contract could be signed.

With that in mind, Stephens asked Towns if he would be willing to agree to extend the current contract by three months to allow for further research and development of a new ordinance.

Towns replied that he was unable to answer the question at the time, noting he may be able to respond at the next Fiscal Court meeting.

Towns did state that doing so would put him in a difficult position, as he has held off hiring new personnel with the uncertainty of the contract, and extending the deal for three months with the possibility of losing the bid could be an expensive risk for his company.

Towns also noted that asking for a rate cut, after getting one five years ago was unrealistic and he would not be able to afford providing service at the rate included in the latest attempted ordinance.

“You had rates better than most of the state and you threw it away,” he said. “The past five years have killed us.”

He did state that he wanted to continue to do business in the county.

“We want to be in the county, or else we wouldn’t have been here the past 20 years.”

Towns argued that he has acted in good faith, as he was the only bidder and has not been officially notified that the county was ending the contract.

When the County redid the ordinance five years ago, they mandated a lower rate scale, from $18 a month to $15 a month. Scott Solid Waste met that lower rate when it won the franchise agreement, but lower revenue forced the company to scale back on costs, such as reducing the number of personnel on a route to only one.

The newest attempt at an ordinance asked for even lower rates for residential garbage pick-up – down to $12.50 per month and including a discount for senior citizens.

Towns argued that the Fiscal Court had better options for an ordinance, including changing back to requesting bids and negotiating pricing with companies directly instead of imposing the pricing on them, opening up service to anyone who could provide pick up or adding the monthly billing for garbage on to a utility bill – such as the water bill.

Judge Stephens agreed there need to be another way to put an ordinance in place, perhaps by looking at what other counties are doing, but again, argued that more time is needed.

Another problem the County is facing going forward is the potential added expense of conducting billing and staffing the transfer station in Stearns.

Towns stated his company could not sustain the cost any longer.

“My biggest issue is we can no longer have a person in the local office for billing or run the transfer station anymore,” Towns said. “I can’t afford to pay someone $3,500 a month in salary and benefits for about $800 in revenue.”

Chaney offered his thoughts, noting that since it was a special session, and the0 Court could only discuss what was on the agenda, it was counter productive to discuss alternatives at that time, and the matter would have to be addressed at the next regular scheduled session (Tonight at 6:00 p.m.).

With that the Magistrates voted against the second reading of the ordinance and to return the bid to Scott Solid Waste unopened.

In other actions Friday: The Fiscal Court approved a resolution allowing the Ambulance Service to pursue a grant to remount an ambulance, appointed David Ball and Teddy Coffey to the Airport Advisory Board and to appoint Stephen McKinney as the new Emergency Management Director.

EMS/911 Director Jimmy Barnett stated McKinney would be replacing Rudy Young, who retired at the end of November, and would essentially maintain his position at McCreary County 911, with added duties to his job description. Half of his annual salary of $25,000 will be reimbursed by the state.