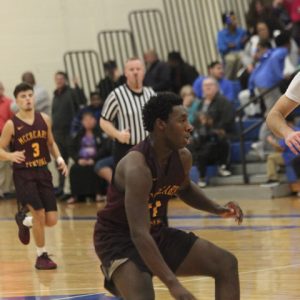 Photo by Chris Hollis Devon Hamilton’s 27 points led the Raiders to their first win of the season on opening night. 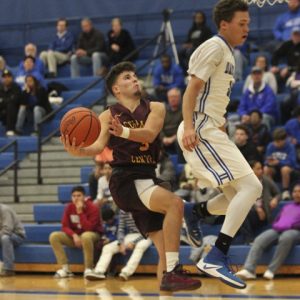 The McCreary Central Raiders opened their 2016 season with a big, 63-49 win over Danville Friday night.

Senior Devon Hamilton led both teams with 27 points and 17 rebounds in the assertive win over the Admirals.

McCreary jumped to a 4-0 lead in the opening quarter on a pair of baskets from Hamilton and continued to take charge – eventually leading 17-7 with 2:16 left in the period.

But Danville fought back, scoring the next 9-points to cut the Raiders’ lead down to 1. Three of the Admirals points came on four free throws after McCreary’s Devin Strunk was ejected on a pair of technical fouls to open the second quarter. The Raiders recovered from the loss of their player, but were not able to pull away from Danville. With 42 seconds left in the half the Admirals gained the lead for the first time on a jumper.

On the next trip down the floor Hamilton regained the lead for his team with a 3-point basket with just 3 seconds on the clock, giving the Raiders a 29-28 lead.

Coming out of the break Danville opened strong, taking a 36-31 lead, scoring 8-points in the first 2:20, but then the Raiders turned up the heat. Hamilton scored 9 of the next 11 points to help McCreary grab a 44-43 lead with 1:34 lead with 1:34 left in the third quarter, and a Brandon Troxell basket ended the period.

McCreary outscored Danville 17-6 the rest of the way, cruising to the finish for their first win of the season.

Hamilton’s 27 led both squads, followed by Hunter Jones with 16, Ryan Jones with 8, Brandon Troxell with 4, Devin Strunk with 3, John Cash with 3 and Nick Longmire with 2.

The Raiders will play Thursday and Friday night in Lynn Camp in the Bowman Classic. They open their home schedule next Thursday when they host Somerset.