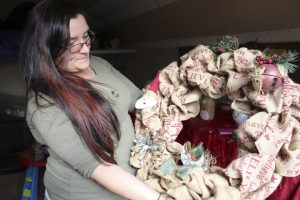 Lorilee Ross creates her crafty handiwork under the logo “Random Craftiness.”  According to her, the name is fitting.

“I get a picture in my mind of what I want to make,” the vibrant, young mother said with a laugh.  “But I never know where it will take me until I’m finished.  I do my best work when I just go with it!”

“My mom was crafty, and my brother draws,” Ross explained.  “I guess it is in the family.  I always liked to draw and paint.  When I was a kid, I would sit with pen, paper, and paintbrushes for hours.  When my daughter, Eriabella, started school, I was looking for a way to express myself.  Once I began making wreaths, I couldn’t stop.”

Lorilee has been making burlap wreaths for about a year.  She openly admitted she got addicted to wreath making and favors burlap as her favorite medium to work with in designing her works of art.

“When she saw my work and said she wanted one, it felt great,” Ross recalled.  “Kay is always so supportive and uplifting.  She hung the wreath on the Library’s door!” 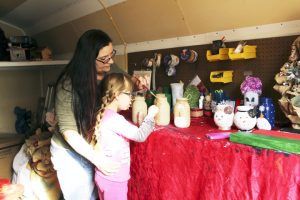 Photo by Eugenia Jones
Lorilee Ross’s daughter, Eriabella, works alongside her mother as they make crafts in their home workshop.

As Ross, originally from California, began participating in local craft fairs, more and more people became aware of her talent.  People saw her work and liked it.  Requests for wreaths began to spiral making the expansion of her work into a full-fledged business opportunity a definite possibility.  However, Ross isn’t sure about taking that next big step into the business world.

“So far, I haven’t wanted this to be a business,” Ross remarked.  “I mostly make wreaths and crafts at holidays and for gifts.  I like making things for friends, family, and community.  I like the sweetness of what I do now.  I don’t want to ruin my love of it.”

“I want my work to be reasonably priced,” Ross remarked.  “All I’m after is something the customer will love-something they will enjoy because it is made just for them.  I think that is more special than buying something at a retail store.”

Ross makes an effort to get to know the people who want to buy her wreaths.  She wants to know their interests and their styles so can customize the wreaths to match the buyers.

To Lorilee, the use of burlap makes her wreaths special.

“Burlap is my favorite.  It has a simple beauty and is versatile,” she opined.  “I like the earthiness of it.”

Her family is supportive of Lorilee’s creativity as evidenced by her brother who designed her logo and her native McCreary County husband who set up her workshop.   Inside the workshop, Lori’s daughter has her own little work table next to mom’s where the youngster follows her mother’s example by creating her own crafts.

Lori advised anyone wishing to learn more about her crafts to visit her Facebook Group called Random Craftiness or to email random_craftiness@yahoo.com.

“Just remember,” she laughed as she issued a challenge to those interested in her work.  “If you can think it, I can create it.”