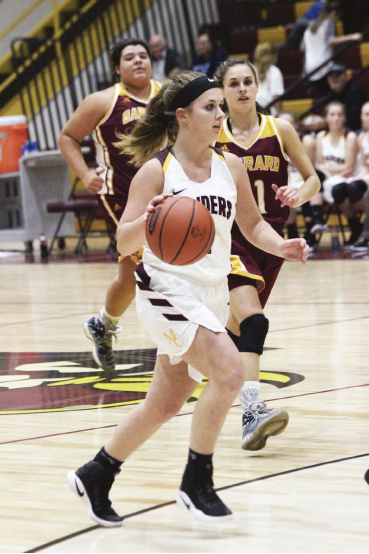 Photo by Chris Hollis
Ally Anderson scored 30 for the Lady Raiders Friday night, but it wasn’t enough as Garrard County pulled away for a win.

Ally Anderson’s 30 points were not enough to push the Lady Raiders to a come-from-behind win over Garrard County Friday night.

The Lady Lions led from start to finish and pulled away late for a 62-45 win over McCreary, sending the Lady Raiders to their fifth loss in a row, and sixth of their last eight.

Garrard County got off to an 8-0 run to open the game and led by as much as 12-points in the half. The Lady Raiders were able to get a pair of treys from Anderson and Lauren Phillips in the second quarter to cut the lead back down to 8, 24-16, at the half.

McCreary stepped up the pressure after the break, which held the Lions down a little, but were unable to close the gap, keeping the same 8-point spread mid way through the quarter.

A 6-0 Lady Lions run, spurred off a turnover opened the door for Garrard as they outscored the Lady Raiders 11-5 in the last part of the quarter.

The Anderson sisters and Phillips combined for four treys in the final frame, but Garrard was able to keep up their offense and pulled away for the win.

McCreary was led by Ally Anderson with 30, followed by Lauren Phillips with 6, Liz Anderson with 5, Macey Welchel with 2 and Brooke Sluder with 2.

The Lady Raiders will be back in action after Christmas with a three-game set in the Chain Rock Classic in Pineville next Tuesday through Thursday. On January 6 the Lady Raiders will travel to Southwestern for a 48th District match-up against the Lady Warriors. Their next home game will be on January 13 when they host Somerset.